In a touching ceremony held on September 11, 2020 in front of CarolinaEast Medical Center, President and CEO Ray Leggett recognized his entire health system family for their efforts during the COVID pandemic. In these unusual times, the 4th Annual Scott Whitford Unsung Hero Award is being shared amongst nearly 2,700 team members at CarolinaEast.

CarolinaEast feels strongly about the importance of recognizing their employees’ achievements, particularly those that go above and beyond the call of duty. They have many recognition programs, but one special award, called the “Scott Whitford Unsung Hero of the Year Award”, is in honor of a beloved member of the CarolinaEast family that lost his life saving others. Scott Whitford was a carpenter in CarolinaEast’s facility services department for seven years and on June 17, 2017, Scott, with his servant’s heart, courageously saved two young women from a powerful rip current in the ocean, losing his own life in the process. For this caring man and his heroic deeds, CarolinaEast named this significant annual honor.

Beginning the year of Scott’s brave act, this award was presented at a ceremony on September 11th of each year to special individual members of the CarolinaEast Family who embodied a similar spirit of sacrifice and heroism. The unprecedented times of the year 2020 called for the decision to award this annual honor to the entire CarolinaEast Family at a small gathering in front of the Medical Center on Friday. 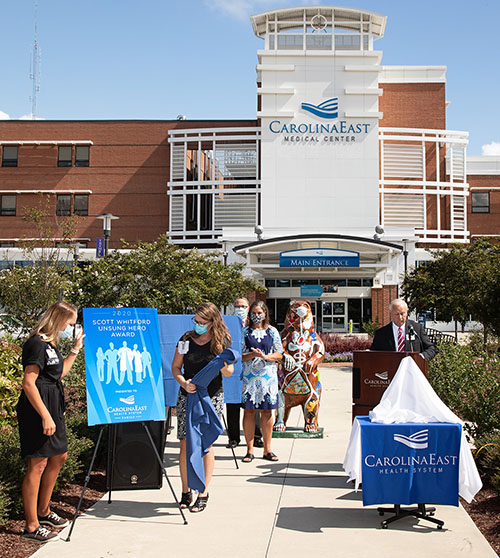 CarolinaEast Chief Nursing Officer and Vice President of Nursing Jim Davis began the event explaining the meaning behind the award, emphasizing that “CarolinaEast Unsung Heroes don’t expect or even want recognition or thanks – they do what they do because it is the right thing to do…every encounter, every opportunity, every day…no exceptions. And they do it in a caring and special manner.”

CarolinaEast CEO and President Ray Leggett then revealed the 2020 Scott Whitford Unsung Hero Award recipient, speaking emotionally to the group of team members present, stating “No one is more deserving of this Award, in 2020, than all of you! God Bless you CarolinaEast Heroes for your unprecedented response to this pandemic and for all of the lives you have saved. Thank you! You pushed aside your personal comfort, and at times your personal safety, and you made sure that your friends, family and neighbors were being taken care of…I am so proud of all of you and of this Organization.” 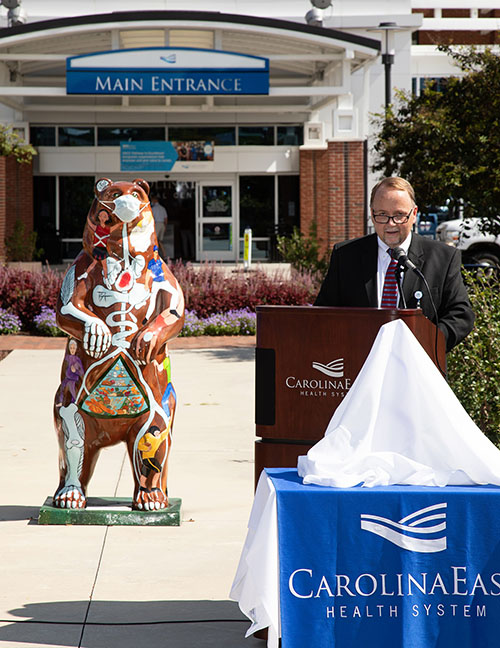 Leggett then explained that the award money that the annual winner typically receives, $500 cash and $500 to be donated to a non-profit organization of their choice, will be combined and donated to assist the healthcare workers at Lake Charles Memorial Hospital who have been devastated by the hurricane and flooding in Louisiana. The $1,000 will be added to the more than $18,000 already raised from CarolinaEast team members through the CarolinaEast Foundation’s gift card campaign to Lake Charles Memorial Hospital. In Leggett’s words, “What a wonderful way to use this Award’s $1,000 to help our fellow hospital workers in this devastated section of Lake Charles, LA.” The Executive Vice President and Chief Nursing Officer at Lake Charles Memorial Health System, Gerald Bryant, commented on the gesture on Facebook, stating “Wow! How incredibly giving. I am touched.” CarolinaEast feels privileged to help others in such a way that truly honors the memory of Scott Whitford.

The full award ceremony can be found on CarolinaEast’s Facebook page.