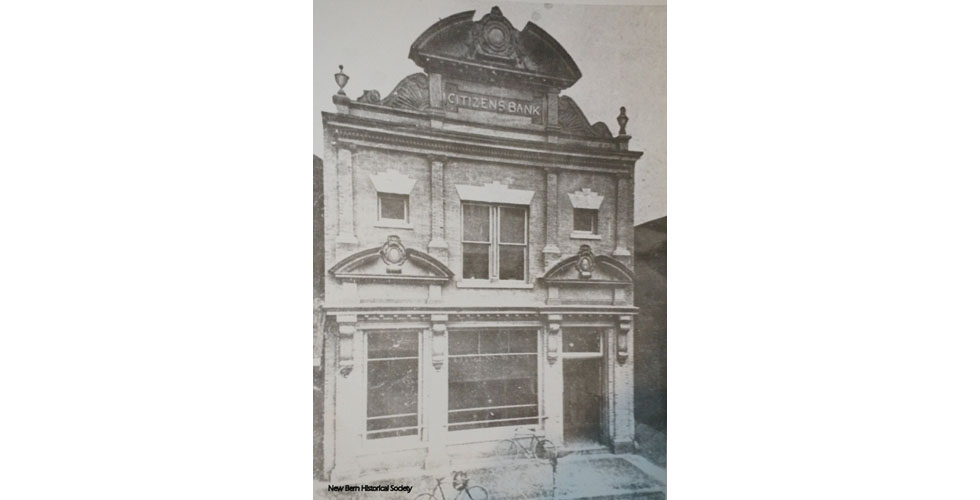 New Bern, NC – Stories and reminiscences of New Bern’s “used to be”. Captain Ratty’s used to be Duffy’s Drug Store; First Citizens Bank sits where used to be the Hotel Queen Anne. New Bern Then and Now by New Bern Historical Society Curator, Jim Hodges, chock full of historic photos and images, is one of the Society’s most popular presentations, selling out 4 times! Now it is going virtual. Free of charge. Be sure to be on the New Bern Historical Society Facebook page at 2 p.m. on Wednesday, July 8 when we’ll live stream Jim’s presentation, and he’ll be on hand to answer questions.

Jim will reveal past and current status of more than 30 New Bern landmarks. He has scoured the New Bern Historical Society collection to share with you these wonderful images from our past. In some cases, the buildings have been carefully renovated and saved in their original condition. In others they have been saved and re-purposed, while sometimes they are simply lost. In any case, you will be fascinated by these historic images.

New Bern Historical Society Executive Director, Mickey Miller is excited about this new project. “Jim’s Then and Now is the first of several presentations we’ll bring to live stream this summer. We are delighted to explore a new venue to share New Bern’s stories with an even wider audience. And we want to thank Charles Tendell for guiding us through this technology.”

Curator Jim Hodges was reared in New Bern, matriculated to University of North Carolina at Chapel Hill earning an undergraduate degree in Chemistry and a post graduate dental degree. After satisfying a military commitment and enjoying several years of international travel, Jim returned to New Bern and practiced dentistry until his retirement in 2012. His current life chapter involves his passion for New Bern and its rich history as a member of the Historical Society’s Board of Directors. As the volunteer Curator of the New Bern Historical Society he spends his days maintaining, conserving and finding ways to share the collection.

The mission of the New Bern Historical Society is to celebrate and promote New Bern and its heritage through events and education. Offices are located in the historic Attmore-Oliver House at 511 Broad Street in New Bern. For more information, call 252-638-8558 or go www.NewBernHistorical.org or Facebook.com/NewBernHistoricalSociety.