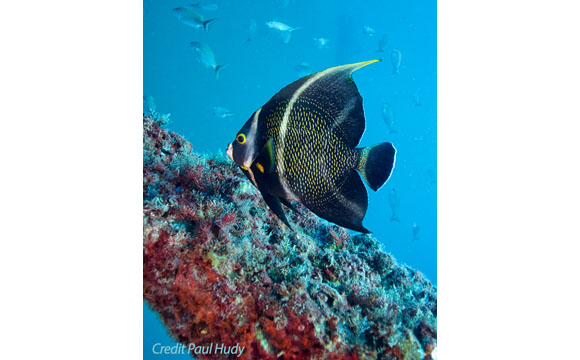 Hatteras, N.C. – When Marc Corbett presents at an upcoming dive symposium, the audience won’t just be seeing his shipwreck photography on-screen. They’ll be surrounded by it.

Corbett, an avid diver and shipwreck researcher, is one of seven presenters scheduled for the Graveyard of the Atlantic Museum’s seventh annual Underwater Heritage Symposium. The symposium, which is free and open to the public, will be held on April 4 from 10 a.m. to 5 p.m. at the museum, located at 59200 Museum Drive in Hatteras. The speakers and topics are designed to be of interest to an audience that includes professional and recreational divers, underwater enthusiasts, maritime historians and anyone with even a passing interest in any of the above. The speakers select their topics based on what they’ve been doing throughout the year or over the course of a lifetime.

Corbett’s presentation, Shipwrecks of the Outer Banks: A Diver’s View, focuses on his experiences diving and photographing Outer Banks wrecks. His underwater photographs are also the subject of the photography exhibit that opens April 1 in the museum.

“Most of the pictures are actually of shipwrecks,” Corbett said, noting that shipwrecks are his focus and his passion.

But marine life is naturally drawn to those underwater structures, so images of fish and other sea creatures are also included in his images. The accompanying information also looks at the masses of water — the northern, middle and south Atlantic bights — that converge off the North Carolina coast in the region.

Because of that, Corbett said, “I think Diamond Shoals is probably the most interesting place to dive in North Carolina. If something exists in the Atlantic Ocean, you can probably see it there.”

Mary Ellen Riddle, the museum’s education curator, said viewing Corbett’s images is akin to being on the seafloor oneself.

“His dives bring him up close to a variety of shipwrecks and diverse sea life,” Riddle said. “He returns topside with photographs that allow the viewer to feel like they too have experienced an underwater adventure.”

Riddle says that makes him a great fit for the annual Underwater Heritage Symposium lineup. Combining a love for history and diving, Corbett is dedicated to hunting and identifying shipwrecks, as well as researching and exploring wrecks in shallow and deep water.

“He is a skilled researcher who is passionate about locating and identifying shipwrecks off the coast of the Outer Banks,” she said.

In symposiums past, Corbett has kept his focus narrow, limiting his presentation to the shipwrecks in a limited area or even just a specific shipwreck. But this year, he promises a broader look at diving the “Graveyard of the Atlantic” through a narrated slideshow followed by a question and answer session.

“There are so many shipwrecks and so many stories to go with them,” Corbett said.

That’s something other speakers at the symposium will focus on as well. Topics vary each year and can include dive safety, technology and various other subjects related to maritime culture. This year’s speakers will discuss such varied topics as why Hatteras was the main target area for the U-boats; information related to shipwreck protection and ownership; ways to safeguard significant cultural resources and habitat during offshore energy development; the steamships lost around the turn of the 20th century to the treacherous Diamond Shoals; the 1942 sinkings of a tanker carrying 86,000 barrels of crude oil and a merchant ship carrying 6,500 tons of sugar by U-boats off of Hatteras; and the marine life found on shipwrecks.

The topics are designed for both professionals in the maritime community and layfolk, the latter something Corbett emphasized the importance of.

“It’s good to showcase shipwrecks to the general public,” he said. “If the public doesn’t know about history, it’s not being preserved.”

However, Corbett said, even as involved as he is in the maritime and dive communities, he walks away each year learning something new during the symposium.

“There’s so many good presentations every year,” he said. “I never walk away without learning at least a couple dozen things.”

Jim Bunch is a North Carolina Humanities Council Road Scholar, author, and professional diver who helped recover the Enigma Machine from U-85. He will discuss why Hatteras was the main target area for the U-boats and why the effort finally failed.

J.T. Barker, a licensed captain and avid wreck diver, explores these questions and answers related to shipwreck protection: Who actually protects wrecks? Why do they do it? Who funds it? Discover what a group of divers did because it needed to be done; and hear the staggering details, the planning, and the burden of risk versus reward from a veteran diver who has led trips to many famous sites, including Andrea Doria, E.M. Clark, Bow Mariner, USS Monitor and more.

Joyce Steinmetz, who is finishing a multi-disciplinary PhD in coastal resources management with a maritime major, takes a look at the requirement to located submerged cultural heritage as part of the mandated first steps to developing offshore wind energy. Developing an improved marine survey methodology could assist evaluations of proposed offshore energy projects and safeguard significant cultural resources and associated habitat.

The Steamers of the Diamond Shoals

Dave Sommers, a dive charter captain and active shipwreck diver, will look at the numerous steamers stranded on Diamond Shoals from the mid-1800s to the turn of the 20th century.

Oil and Sugar…Not so Sweet

During the month of March 1942, the American steam tanker Dixie Arrow loaded with over 86,000 barrels of crude oil was approaching Diamond Shoals when it was torpedoed by U-71.  Three months later, the American steam merchant Manuela loaded with 6,500 tons of sugar was hit by a torpedo fired from U-404. Longtime diver Hal Good will review details of both sinkings and share photos of the wrecks today.

Shipwrecks of the Outer Banks: A Diver’s View

Marc Corbett, a shipwreck researcher and underwater photographer who has an exhibit of underwater shipwreck photography opening at the Graveyard of the Atlantic Museum, will discuss his experiences diving and photographing Outer Banks wrecks.

Beneath the Killing Sea: Life from Tragedy

Inspired by the 1979 Bill Lovin film about N.C. diving, “Beneath the Killing Sea – Life from Tragedy,” underwater photographer Paul Hudy will give an overview on how the ships who were the victims of storms, human tragedy and violence are now a foundation for the world-renowned variety of marine life found off the N.C. coast.

About the Graveyard of the Atlantic Museum

The Graveyard of the Atlantic Museum in Hatteras is named in honor of thousands of shipwrecks that sank off North Carolina’s coast. The Museum is dedicated to the preservation and presentation of the state’s coastal culture and maritime history, which includes these shipwrecks, this repository of history. The vessels are the centerpiece of rich relationships to piracy, war, (Revolutionary, Civil and World Wars I and II), lifesaving, commerce and coastal living. The Museum is filled with related artifacts, which include remnants of the earliest known shipwreck found in North Carolina waters, dating to 1650, objects from the USS Monitor, the Queen Anne’s Revenge, and the USS Huron.

About the North Carolina Department of Natural and Cultural Resources

The N.C. Department of Natural and Cultural Resources (NCDNCR) is the state agency with a vision to be the leader in using the state’s natural and cultural resources to build the social, cultural, educational and economic future of North Carolina. NCDNCR’s mission is to improve the quality of life in our state by creating opportunities to experience excellence in the arts, history, libraries and nature in North Carolina by stimulating learning, inspiring creativity, preserving the state’s history, conserving the state’s natural heritage, encouraging recreation and cultural tourism, and promoting economic development.