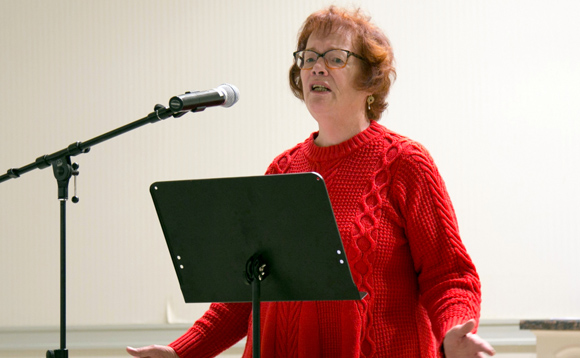 Award-winning poet Jeanne Julian describe Ellen’s poetry this way: “Hearing Ellen read is intense not only because her words are carefully crafted, but also because her delivery is both heartfelt and polished. It is full of constrained drama, combining clear vision, yearning, and a mature irony reminiscent of Ann Sexton.”

Ellen is originally from Syracuse, New York and studied drama in college and has taken seminars on poetry composition and other forms of writing. She read regularly at a coffee house in Syracuse and drew inspiration from poets she heard read in Syracuse, Santa Fe, and New York.

According to Ellen who considers herself a natural introvert, poetry brings her out and inspires her to view her readings as a performance. Ellen says, “Reading in front of a group reveals an inner experience, always with a personal truth at the core. It’s my harangue to the world and to my hidden self.  I’d say my greatest influences were Robert Creeley and William Butler Yeats and, maybe oddly, Henry James.”

After the Featured Poet reads at the Open Mic, the mike is open for original poems from other poets who sign up. The Harrison Center is located at 311 Middle St. in New Bern. This is a free event with donations requested to pay for the space. The readings are sponsored by Nexus Poets, a nonprofit group of Eastern North Carolina poets promoting poetry in the area.