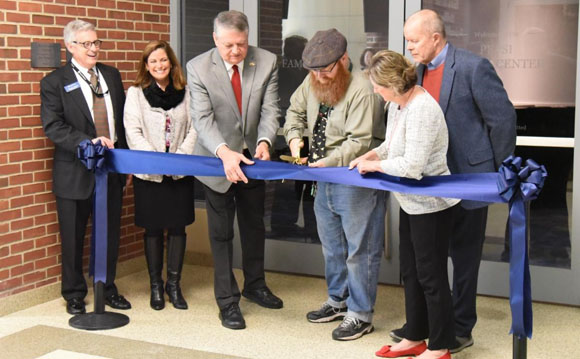 Tryon Palace is pleased to announce the grand re-opening of the Pepsi Portal to History, Wednesday, December 18, at 9 a.m. in the North Carolina History Center. Senator Norman W. Sanderson helped mark the occasion by participating in a ribbon cutting ceremony with Rob Jones, Multimedia Coordinator, Tryon Palace, and members of the Tryon Palace Commission and Foundation boards. Also in attendance was Merrie Jo Alcoke, Eastern Representative at the Office of Governor Roy Cooper. The Pepsi Portal to History, also known as the Pepsi Family Center, reopens after more than a year of repairs to damage caused by Hurricane Florence in September 2018.

The Pepsi Portal to History is an interactive exhibit that has been a visitor favorite, transporting visitors of all ages to 1835 New Bern, where they learn North Carolina history through play and technological displays. The exhibit sustained major damages during Hurricane Florence, when rain waters flooded the subfloor, destroying the wiring that was beneath the floor. This wiring was essential to the operation of the many computers that run the exhibit, leaving the entire exhibit inoperable. The reopening is made possible through the efforts of contractors and staff, and the support of the Tryon Palace Foundation.