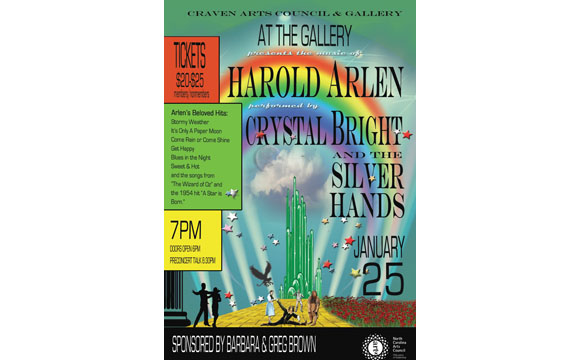 Craven Arts Council and Gallery is proud to present the music of Harold Arlen, performed by Crystal Bright on January 25th. Composer of the music for “Wizard of Oz,” Arlen is considered one of the premier contributors to the Great American Songbook. The concert will begin at 7pm with a preconcert talk about the composer’s life at 6:30 p.m.

Harold Arlen wrote more than 500 songs in the course of his career, including composing the songs of the 1939 “Wizard of Oz” and 1954 “A Star Is Born” films. Starting as an accompanist for live performances and early recordings, Arlen achieved his first big success with “Get Happy,” with Ted Koehler. Many of Arlen hits were written for musicals, movies, or the Harlem based nightclub the Cotton Club. Hits include “Over the Rainbow”, “The Man That Got Away”, “It’s Only a Paper Moon”, “Stormy Weather”, and “That Old Black Magic.”

Award winning singer/songwriter, ethnomusicologist, composer, and multi-instrumentalist Crystal Bright has played over 1000 shows from Canada to Austin, and New Orleans to Seattle and Thailand the past 8 years, sharing the stage with the likes of Beats Antique, Abney Park, Aurelio Voltaire, The Love Language, Rising Appalachia, Larkin Grimm, Pearl and the Beard, and many more.  Bright performed with the North Carolina Symphony in 2011 on an arrangement of her song “Toy Hammer,” and has performed at various festivals around the country (SXSW, Savannah Stopover, FloydFest, DragonCon, LEAF, Midpoint Music Fest, The Steampunk World’s Fair, The International Steampunk Symposium, Shakori Hills, and many others.) She took Runner Up for On the Rise at Floydfest 2013 for returning sets in 2014 and 2015, and was named Best Singer in 2012, Best Songwriter in 2014, and Best Musician in the Triad in 2015 by Greensboro’s Yes Weekly.