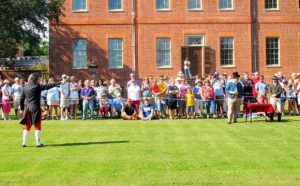 New Bern, NC – Join Tryon Palace at the annual reenactment of the Stanly-Spaight Duel, an interpretation of an infamous moment in New Bern’s early history at 4 p.m. on Saturday, August 31, at the New Bern Academy.

On September 5th, 1802, a prominent New Bern lawyer met his political rival, a former State Governor, in a lethal duel on the streets of New Bern. Step back in time to an era where a man’s personal honor was his most cherished quality and any incursion on this prized value could result in fiery and violent retribution. Watch the drama unfold before your eyes in a gripping reenactment of this fateful day.

This reenactment will include black powder firings and feature replicas of period weapons, which are loud and sudden.