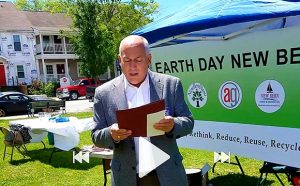 Earth Day was declared by Senator Gaylord Nelson on April 22, 1970. Let’s reflect on his statement almost half a Century ago. He said, “Our goal is not just an environment of clean air and water and scenic beauty. The objective is an environment of decency, quality and mutual respect for all other human beings and all living creatures.”

Young people were interested in his ideas then, and they are today! The young people back then are considered Baby Boomers today. Some embraced the concept and others took a different path.

We gathered on Saturday, April 20th to locally re-start the conversation and get back to basics by learning how we can all make changes in our daily lives. And ultimately improve our environment and “the quality and mutual respect for all human beings and living creatures”.

WHEREAS, all species play a unique role in the complex web of life and contribute to the ecosystem services on which all life on Earth depends, and hence, protecting our species is crucial to the survival of this planet and its inhabitants; and

WHEREAS, wild animal populations have declined on average by more than half and the Earth is facing an era of mass extinction; and

WHEREAS, the loss of species is, for the most part, a result of human activity, including degradation of ecosystems, deforestation, pollution, and climate change; and

WHEREAS, by 2050, between 60-70% of all people will live in cities and species provide important services to city dwellers such as generating oxygen and purifying the air; controlling other animals considered pests or that spread disease; pollinating plants and crops; providing recreation opportunities and well-being, etc.; and

WHEREAS many plants, wild animals, and pollinators live in urbanized landscapes, and cities thereby have a responsibility to examine the ecological impacts of expanding urban areas and how to protect biodiversity; and

WHEREAS, it is more important than ever to cooperate locally and internationally to defend the environmental progress that has been heretofore gained; and

WHEREAS, it is essential to expand and diversify the global environmental movement to achieve maximum progress; and

WHEREAS, Earth Day is an annual reminder of the constant need for environmental activism, stewardship commitments, and sustainability efforts;

NOW, THEREFORE, I, Dana E. Outlaw, Mayor of the City of New Bern and on behalf of the Board of Aldermen and the Citizens of New Bern distinct honor of proclaiming April 22, 2019 as EARTH DAY throughout New Bern, NC and encourage all of its inhabitants, businesses, and institutions to use EARTH DAY to celebrate the Earth and promote the wellbeing of the inhabitants of the city/town and the protection of their environment.”

Special thanks to the educators, volunteers, sponsors, and everyone who joined in the fun, learning experience on April 20.

Please let me know if you want to get involved in making a difference locally by calling 252-259-6853 or sending us an email.