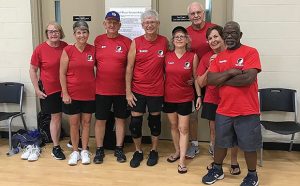 I never heard of this game until I moved to New Bern (4 yr.’s) ago, when a neighbor introduced me to the game. It’s been reported that pickleball is the fastest growing sport in the country and played by all ages, but mostly seniors, which fits New Bern’s demographics to a tee, as it provides great exercise with low Impact and fun social interaction.

Played both indoors and outdoors on a court about 1/3 the size of a tennis court, the net is 1st lower and the paddle/racquet is solid, about twice the size of a ping-pong paddle, and the ball is a whiffle ball the size of a tennis ball, predominantly played as a doubles match both mixed doubles and double play, a game is to 11 points win by two

Two years ago, a league was established, Coastal Plains Pickleball League, comprised of the following teams, New Bern, Fairfield Harbour, Jacksonville, Greenville, Crystal Coast and Pamlico County. Each team plays the other twice per year, and each team hosts twice per year at their respective indoor facilities, most teams have a team name and jerseys i.e. Twin River Bears/New Bern, Devil Dogs/Jacksonville and Pickled Heron’s/Pamlico county.

There are also local and State-wide tournaments, from the annual Senior Games (State Finals in Concord, NC last year had 400+ players) open tournament in Jacksonville in March usually has

200 + players and regional events in Myrtle Beach can have as many as 500+ players in different age and skill categories. So, if interested or just curious, Google Pickleball as there are hundreds of videos for beginners and advanced players alike, or better yet come join us for some great fun and exercise and see what it’s all about.