Beaufort County Traditional Music Association (BCTMA) has been on a mission of preserving and nurturing traditional music in Eastern NC. On Saturday, they used their mission to help raise funds for Hurricane Relief to benefit New Bern.

In organizing the event, they invited four New Bern based bands to perform for an evening, offering great music to those in attendance. Opening the event and debuting their act all at once, (photo above) The Neuse River Ramblers who offered a couple of rock and pop classic with a folk-infused bluegrass twist. This was the quartet’s debut performance and lucky for them, they played to a packed house of music fans.

The next New Bern based band to come to the stage was the popular jam band we know and love as the Hot Buttered Grits. The five-piece band was shy their lead, electric guitar player, John Jondrow, who was ill. The rest of the players came together in their original formation from 14 years ago and played for the well-received crowd.

Adding to the mix and diversity and music mix, next up was the classic rockers best known as Peace Soldier. They offer a nearly full set of classic rock covers and ended their set with an original song.

Closing out the evening is the most beloved family band around, Bear City’s own, Strung Together. Offering their traditions and music offerings so to complete a full night of fun and diverse music for the packed house. 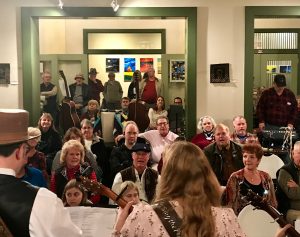 BCTMA is a nonprofit supporting the arts and traditional music. GuitarFest is an annual event held in Don Skinner’s name who was a long time member of the organization. This year’s event was earmarked specifically for their friends and neighbors in New Bern, still suffering from the damages of Hurricane Florence. 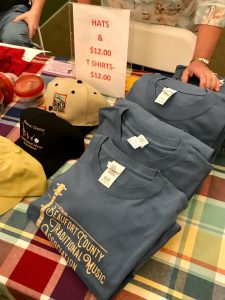 The event was held in the Turnage Theater Galler, located on Main St., in downtown Washington. There was no cost for this show but donations were encouraged and accepted at the door for the benefit of the people of New Bern. In all, a total of $1300 was collected on sight that night which is going directly to our local chapter of the Salvation Army. 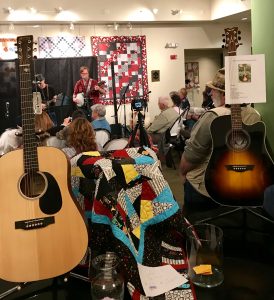 I noted while announcing this show for my blog last weekend that each of these New Bern based bands has members that were directly impacted by the flood. Yet, they all have made it their mission to use music to heal their hometown.

For more coverage on the event be sure to read NCMZ.LIVE this Friday at 5 pm.

To learn more about the good work of BCTMA visit their website at: