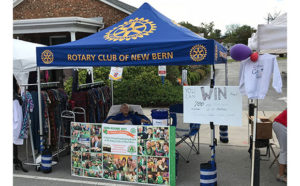 Polio is a highly infectious disease that infects the nervous system, crippling its victims.  In the 1940s and 1950s, polio killed or crippled nearly two million people globally. Thankfully, a vaccine was developed to ward off the disease, and as a result the number of cases has been reduced from 350,000 in 1988 to just 22 in 2017!  This reduction was achieved by a massive vaccination effort to eradicate the disease by the Rotary Foundation, its international partners, and the World Health Organization.

Many countries, including the United States, have been declared polio free. Since 1979, no cases of polio have originated in the United States. However, the virus has been brought to our country by travelers with polio. The last time this happened was in 1993. So far, the cases arriving in the U.S. have not had serious consequences, largely because the vaccine is so widely accepted here, which prevents the virus from spreading.  Since it takes only one traveler with polio to bring the disease into the United States, it is imperative that this protection be maintained until worldwide eradication of the virus is achieved. As long as a single child in the world has polio, all children are at risk!

World Polio Day was initiated by Rotary nearly a decade ago to sharpen awareness towards the eradication of polio as well as to commemorate the efforts of thousands of employees of the World Health Organization and other volunteers committed to this goal. This year it will be celebrated on October 24. You can support the campaign against polio by making a donation to a Rotary Club earmarked for the fight against polio and by being sure that your neighbors as well as your governmental representatives are informed and supportive.

Submitted by: Philip Swain, Past President, The Rotary Club of New Bern