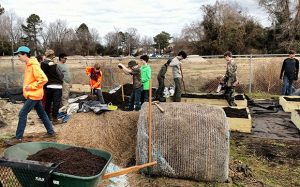 As part of the requirements of achieving the Eagle Scout rank as a member of the Boy Scouts of America, a Scout must plan and carry out a service project for their community.

The planting beds are built to withstand localized flooding and increase the capacity of the garden. The community garden is an on-going project of local volunteer master gardeners, with the garden producing 7,000 pounds of fresh produce each year for food-insecure families.