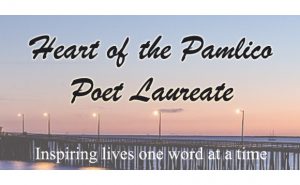 To honor the memory of its founder, poet Jerry Cuthrell, The Pamlico Writers’ Group is pleased to announce its first-ever search for a Heart of the Pamlico Poet Laureate to represent Eastern North Carolina.

The successful candidate for poet laureate will be an accomplished poet, age 21 or over, who has resided in Eastern North Carolina (east of the I-95 corridor) for a minimum of one year, and who has advocated for poetry as a means to inspire, inform, and entertain.

“The Heart of the Pamlico Poet Laureate will serve as the ambassador of Eastern North Carolina’s vibrant literary life, promoting its poetic community, and celebrating the written word in North Carolina, always mindful of the fact that poetry matters,” said Eileen Lettick, a representative of the Pamlico Writers’ Group.

Suggested roles for the poet laureate’s two-year term are to develop working relationships among other poets, writers, and teachers; participate in the annual Pamlico Writers’ Conference; showcase poetry on regional and social media; and bring poetry programs to schools and public events. The selected candidate will receive a cash award of $1,000 and a complimentary membership in the Arts of the Pamlico for one year.

The Pamlico Writers’ Group, an affiliate of Arts of the Pamlico, has a membership of approximately seventy-five writers. Since its founding in 1973 in Washington, NC, it has been committed to providing writers with training tools and resources through its critique groups, annual conferences, and workshops.

For more information and an application form, go to PamlicoWritersGroup.org/Poet-Laureate.