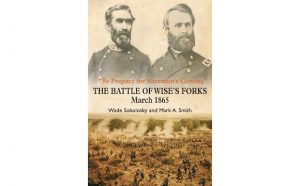 On Wednesday, September 13, Civil War Historians Wade Sokolosky and Horace Mewborn will bring the truth of this piece of the Civil War to New Bern Historical Society’s Lunch & Learn at The Chelsea Restaurant.  History has relegated the Battle of Wise’s (Wyse) Forks, March 7–11, 1865, to little more than an insignificant skirmish during the final days of the Civil War. Indeed, most histories mention it not at all. Wade Sokolosky will discuss the battle, and his latest book, “To Prepare for Sherman’s Coming”: The Battle of Wise’s Forks, March 1865, which erases this misconception and elevates this battle and its related operations to the historical status it deserves. Horace Mewborn, historian and author, will preview the fall tour that he and Sokolosky will be leading, The Civil War in Eastern North Carolina, covering Wise’s Forks, New Bern, Goldsboro and Kinston.

Colonel (Ret.) Wade Sokolosky, a native of Beaufort, North Carolina, is a graduate of East Carolina University and a 25-year veteran of the U.S. Army. He is one of North Carolina’s leading experts of the 1865 Carolinas Campaign. Wade has lectured throughout the Carolinas, speaking to roundtables, various societies and organizations, and at historical sites. He is the co-author (with Mark A. Smith) of “No Such Army Since the Days of Julius Caesar”: Sherman’s Carolinas Campaign from Fayetteville to Averasboro, released this January in an updated and expanded version, and the author of “Final Roll Call” Confederate Losses during the Carolinas Campaign.”

Horace Mewborn is a native of North Carolina. After graduating from Campbell College he served eight years with U.S. Army, he is a veteran of the U.S. Special Forces. After leaving the army, he graduated from East Carolina University and entered the FBI spending 21 years in their service. Among his assignments with the FBI were tours of duty in New York City, Washington D.C., and FBI headquarters. He has authored five articles for Blue and Gray Magazine, including three articles about the operations of John Mosby and his Rangers and an article on Stuart’s ride around McClellan. Horace co-authored the book on Mosby’s command, the 43rd Battalion, Virginia Cavalry, for the H.E. Howard Virginia Regimental series, and he compiled and edited From Mosby’s Command, a collection of newspaper articles by and about John Mosby and his Rangers.

Lunch & Learn starts at 11:30 a.m. at the Chelsea Restaurant, 335 Middle Street, New Bern. The cost is $18 for Historical Society members and $20 for non-members; lunch is included. Advance reservations must be made in by calling the New Bern Historical Society at 252-638-8558, or can be ordered at NewBernHistorical.org/tickets. Lunch choices are: Salmon Bruschetta topped with tomato, basil, garlic, and parmesan over rice pilaf with seasonal vegetables. Sautéed Chicken Breast with lemon, garlic veloute sauce over rice pilaf with seasonal vegetables

The mission of the New Bern Historical Society is to celebrate and promote New Bern and its heritage through events and education.  Offices are located in the historic Attmore Oliver House at 511 Broad Street in New Bern.  For more information, call 252-638-8558 or visit NewBernHistorical.org or Facebook.com/NewBernHistoricalSociety.