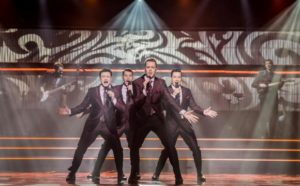 You don’t have to go to Charlotte or Raleigh, Under the Streetlamp is coming to the New Bern Riverfront Convention Center for a live, one-night-only performance on May 21. Featuring former leading cast members of hit Broadway musicals including Jersey Boys, Under the Streetlamp is a concert celebration of classic hits of the American Radio Songbook from the 1950s-1970s. Their shows feature tight harmonies and slick dance moves that take audiences back to an era of sharkskin suits, flashy cars and martini shakers. A flashback to a time when, on hot summer nights, people would gather under a streetlamp to sing their favorite rock and roll songs.

Presented by the New Bern Historical Society and Title Sponsor, Chesnutt, Clemmons and Peacock, P.A., tickets for Under the Streetlamp at the Historical Society office at 511 Broad Street or online at www.NewBernHistorical.org/tickets, or by calling 252-638-8558.

Classic hits first performed by Frankie Valli and The Four Seasons, Elvis Presley, Tom Jones, The Beatles, Roy Orbison, Bobby Darin and more are reborn for today’s audiences in this evening of great music and hilarious behind-the-scenes tales, complete with an exceptional seven-piece band composed of world-class musicians.  With irresistible charm and rapport, Under the Streetlamp offers audiences the opportunity to get to know four critically acclaimed stars of stage and screen, Eric Gutman, Christopher Kale Jones, Brandon Wardell and Shonn Wiley. While each performer gets his moment in the spotlight, their synergy and charisma as a group has drawn an extremely devoted nationwide following. .Each performer carries with him an impressive list of credits.  Between them, they have appeared on Broadway, in feature films and on television – including special appearances during the New Year’s Eve celebration in Times Square, on The Tonight Show, The Primetime Emmy Awards, The Tony Awards and The Oprah Winfrey Show.

We think of ourselves as hosts to a party – and we’ve invited people of all ages, says Gutman.
They can sing along. They can dance in the aisles. We of course show respect for these great songs and we want everyone to leave the party smiling. The show’s original performers met onstage as the lead characters in Jersey Boys and have since formed a concert sensation of their very own.  After achieving initial success performing in and around Chicago, Under the Streetlamp aired its first PBS special in 2011, and a second in 2014.

The four gifted singers are currently on tour in support of their 3rd PBS Special – Rockin’Round The Clock, thrilling sold-out houses throughout the country.   Under the Streetlamp will play the New Bern Riverfront Convention Center at 203 South Front Street for one performance only on Sunday, May 21 at 7pm.  Doors open at 5pm.  Tickets are $38 plus tax for general seating, $57 plus tax for preferred, $33 plus tax for active duty military, their dependent and students. Limited front and center sponsor seating is available at $125. Tickets are available for purchase at the Historical Society office at 511 Broad Street in New Bern, www.newBernHistorical.org/tickets/, or by calling 252-638-8558.

Title sponsor for this Historical Society event is Chesnutt, Clemmons and Peacock, P.A. Your Trial Attorneys.  All proceeds from the concert go to support the Historical Society’s ongoing educational programs, New Bern Battlefield Park, and Attmore-Oliver House. The Historical Society thanks all their sponsors including, hotel sponsor, Doubletree by Hilton; and  media sponsors,  CTV10, Beach, Boogie and Blues, 107.9 WNCT, Public Radio East, The Sun Journal and WCTI News Channel 12.