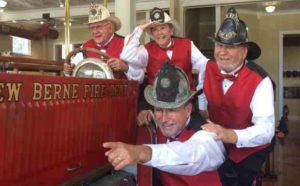 The New Bern Firemen’s Museum is in the final phase of converting the old Fire Station on Broad Street into its new home.  Jon and Karen Segal and their foundation have challenged the Museum dollar for dollar to raise $15,000.00 to complete the second floor renovation.  To help meet that challenge, The Southern Gentlemen Barbershop Chorus is hosting a benefit on Friday, October 21st from 6 p.m. to 9 p.m. at The New Bern Farmers’ Market on Front Street.  A barbeque dinner with all the fixin’s will be provided by the Benefit’s Title Sponsor, Moore’s Olde Tyme Barbeque.

Toe-tappin’, thigh slappin’ and hand clappin’ entertainment will be provided by the Southern Gentlemen Barbershop Chorus, The Harbor Sounds Bluegrass Band, plus a few surprises or two. The irrepressible Dann Miller, morning host of 97.9 FM “The Bear” will emcee the event.

The Southern Gentlemen Barbershop Chorus, founded 25 years ago in New Bern, is part of a 28,000 man worldwide a cappella close harmony singing society.  They have performed throughout Eastern North Carolina, Mumfest, the New Bern Riverfront Convention Center, area churches and nursing homes.  Their generosity has been extended to the Coastal Women’s Shelter, Merci Clinic, Big Brothers/Big Sisters and now the Firemen’s Museum.

Asa Gatlin’s Harbor Sounds formed in 1998, plays a mix of bluegrass, gospel and folk music.  They have performed throughout the Southeast and as far west as Nashville, TN.  Their sound is matched only by their generosity.  They accept no compensation in order to support worthy local charities and organizations.

Mark your calendar and plan to attend this fun-filled evening on October 21 from 6 to 9 pm. Tickets are $20 in advance for food and entertainment and available from The Firemen’s Museum, The UPS Store, The Flag Man at the Farmer’s Market, Mitchell Hardware, The Pepsi Store, Fuller Music, New Bern Fire Headquarters or from any member of the chorus.  Credit card purchases can be made by calling 252-229-6819.  Entertainment only tickets can be purchased at the door for $20.00.