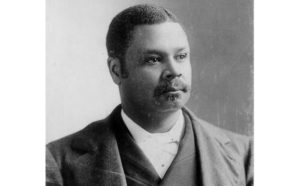 On Saturday, October 1, 2016 at 12 noon, the Historic Dryborough Association will host a free, special exhibit, program, and bus tour that will highlight the extraordinary life of United States Congressman George H. White, Sr. (1852-1918). The event will be held at the New Bern-Craven County Public Library in the Hayden Hodges Jones Auditorium.  Everyone is welcome to attend this historic event.

George Henry White, Sr. was born in Rosindale, Bladen County, North Carolina.  His father, Wiley Franklin White (~1823-1893) was a free person of color and his mother who is yet unknown may have been a slave.  His father’s third wife, Mary Anna Spaulding (~1840-1912), a free woman of color, brought him up as her own.  Through education in North Carolina schools and at Howard University in Washington, D. C., he became an educator and school principal in New Bern, an attorney, a North Carolina State Representative and Senator, a United States Congressman, a founder of Ebenezer Presbyterian Church in New Bern, and a co-founder of the African American town of Whitesboro, New Jersey among many other accomplishments.

The event will begin at 12pm when the George H. White exhibit will open to the public with items from the Ethel Burnette Martin Staten Collection.

At 1pm, the program will highlight several areas of his life:  Early Childhood, Education, Business, and Religious Life by Nelson Bell McDaniel; Political Life by Dorothy Hawkins Bryan; and a special appearance by Bernard George as George H. White who will share his final speech given before the United States House of Representatives in 1901 entitled “He, Too, Like The Phoenix Shall Rise Again.”  Light refreshments will be served.

At 2:30pm, there will be a bus tour led by Bernard George of places in New Bern and Dryborough where George H. White lived, raised his family, worshipped, worked, and a special visit to his family burial plots at Greenwood Cemetery by Zelda L. Bryant and David A. French.  Immediately following, John B. Green, III will lead a special tour showing the Civil War trenches in Greenwood Cemetery that were dug when New Bern was invaded by Federal forces in 1862.

While the event is free and open to public, to assist with planning for the bus tour, please call Ms. Staten at 252-637-7192 to reserve your place by Wednesday, September 26, 2016.  Please wear comfortable shoes for the cemetery tour.  You may also follow along in your car with no reservation.

The event is made possible by the Historic Dryborough Association Board under the leadership of Ethel Martin Staten in partnership with the City of New Bern Parks and Recreation Department Director Thurman C. Hardison and The Family History Society of Eastern North Carolina.