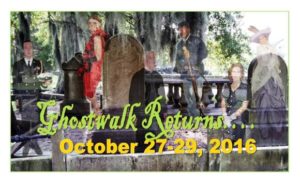 The New Bern Historical Society is looking for a few good ghosts. They are seeking both veteran and new ghost actors to portray the historic characters in this year’s Ghostwalk, Whispers From the Past.  Ghostwalk brings to life noted personalities from New Bern’s past right in the very locations they may have been seen. There’s no need to worry though, all the apparitions in these stories are from the pages of history, not from science fiction.

Mickey Miller, Executive Director, is looking for volunteers, both men and women, ages 18 and up to play the phantom roles, “We’d like actors who are interested in this fun and exciting event, and who can give the time for the event’s three days”. Auditions will be held August 11, 2016 at 7:00pm at the Attmore-Oliver House at 511 Broad St. No preparation is necessary. Actors will be asked to read from scripts. Those selected will perform at one of 16 ghost sites including Cedar Grove Cemetery. Ghostwalk will take place the evenings of October 27 – 29.

If you are interested in participating in one of New Bern’s premier events as one of the ghostly specters from the past, call or email the New Bern Historical Society office at 252-638-8558.