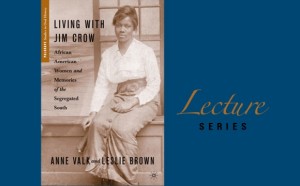 Professors and Authors Annie Valk, Ph.D., and Leslie Brown, Ph.D., will visit Craven Community College (CCC) to deliver a community lecture about their book, Living with Jim Crow: African American Women and Memories of the Segregated in the Orringer Auditorium. This event is free and open to the public.

Living with Jim Crow: African American Women and Memories of the Segregated South recalls an American history like no other. This groundbreaking, oral history collection offers a powerful look at women’s lives under a regime of racial oppression and segregation. Its narrators give moving accounts of personal relationships, family and community life, work and political protest, all set against the context of survival in an age of pervasive racism. These interviews illuminate the central roles black women played as laborers, caretakers, reformers and activists. Through their efforts to defeat Jim Crow, they not only sustained black communities, but also reshaped the history of the American South. Several of the interviews in this work were conducted in New Bern, N.C.

The event is sponsored by the CCC Foundation and the Family History Society of Eastern North Carolina. The event is hosted by CCC’s Liberal Arts and University Transfer program.

Annie Valk, PhD., is the associate director for public humanities and lecturer in History Center for Learning in Action in the Department of History at Williams College, Williamstown, Mass. Valk is a teacher, historian, and advocate of community-based learning in the arts and humanities. She teaches oral history and coordinates Claiming Williams Day, a series of interactive events about building and sustaining a more inclusive community. Through the Center for Learning in Action, she works with students and faculty on arts and humanities projects that emphasize experiential learning and community-campus connections. Valk’s expertise includes oral history projects, exhibits and other programs and she has published extensively on topics related to women’s history and public history. She currently serves as the President of the national Oral History Association. Valk earned her doctorate in History from Duke University. Prior to arriving at Williams, Valk served as Deputy Director of the Center for Public Humanities at Brown University. Her scholarly publications include: Living with Jim Crow: African American Women and Memories of the Segregated South, with Leslie Brown (Palgrave, 2010); and Radical Sisters: Second Wave Feminism and Black Liberation in Washington, DC, 1968-1980 (University of Illinois Press, 2008).

Leslie Brown, Ph.D. is an associate professor in the Department of History at Williams College, Williamstown, Mass. Brown received a certificate in Women’s Studies and her M.A. and Ph.D. degrees in history from Duke University in Durham, North Carolina. From 1990-1995 she co-coordinated “Behind the Veil: Documenting African American Life in the Jim Crow South,” a collaborative research and curriculum project at the Center for Documentary Studies at Duke University. Brown has taught at Williams College since 2008, offering courses in American and African American history and studies; American, comparative, and African American women’s history and studies; and oral history. Brown’s scholarly publications include: African American Voices: From Emancipation to the Present (Wiley, 2013); Living with Jim Crow: African American Women and Memories of the Segregated South, with Anne Valk (Palgrave, 2010); Upbuilding Black Durham: Gender, Class, and Black Community Development in the Jim Crow South (University of North Carolina Press, 2008).