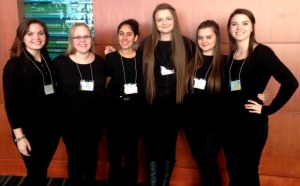 The students presented a scene from their fall one act play, The Insanity of Mary Girard, for the group acting category and earned the highest rating, Accomplished, for this performance. This rating qualifies the group to compete in the national competition in Lincoln, Nebraska in June.

The group also received the highest recognition of “Best in room/Critic’s Choice,” which allowed the group to perform the scene for the entire festival at the awards ceremony, the Tarheel Tapestry, at the end of the weekend.