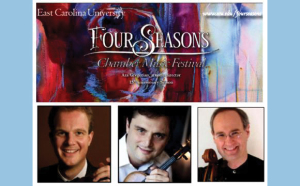 The Four Seasons Chamber Music Festival brings internationally-renowned musicians to Eastern North Carolina and beyond for concerts, master classes and interactive community outreach. In residence at the East Carolina University School of Music, the festival is celebrating its 15th Anniversary Season. Highlights of past seasons include more than 150 public concerts, 300 master classes, two performances at Weill Recital Hall at Carnegie Hall and a six-concert tour of Israel.

The first German artist to ever win the International Naumburg Violin Award in New York, Axel Strauss has been equally acclaimed for his virtuosity and his musical sensitivity. The Salt Lake Tribune praised his well-rounded artistry by saying, “Strauss quickly established that he is a virtuoso to be reckoned with. But amid his technical acumen, there was a genuine musician. His interpretive prowess was delightful.” Strauss made his American debut at the Library of Congress in Washington D.C. and his New York debut at Alice Tully Hall in 1998. Since then he has given recitals in major North American cities, including Boston, Chicago, Cleveland, Los Angeles and San Francisco. In 2007 he was the violinist in the world premiere of “Two Awakenings and a Double Lullaby,” written for him by Pulitzer Prize winning composer Aaron Jay Kernis.

Cellist Michael Kannen has distinguished himself as a musician and educator of uncommon accomplishment who is comfortable in widely diverse musical situations and venues. He was a founding member of the Brentano String Quartet and for seven years performed with that group on concert stages around the world, on radio and television, and on recordings. During those years, the Brentano Quartet was awarded the first Cleveland Quartet Award, the Naumburg Chamber Music Award, a Royal Philharmonic Award and was the first participant in the Chamber Music Society of Lincoln Center II program. Kannen continues to perform chamber music around the country as a member of the Apollo Trio, on period instruments with the Houston-based group Context and at major music festivals such as Yellow Barn, Chamber Music Northwest, Portland Chamber Music Festival and the International Musicians Seminar in Prussia Cove, England.

Known for his thrilling performances and musical creativity, Ara Gregorian made his New York recital debut in 1996 in Carnegie Hall’s Weill Recital Hall and his debut as soloist with the Boston Pops Orchestra in Symphony Hall in 1997. Since that time he has established himself as one of the most sought-after and versatile musicians of his generation with performances in New York’s Carnegie Hall, Avery Fisher Hall, Alice Tully Hall, Washington D.C.’s Kennedy Center and in major metropolitan cities throughout the world including Boston, Los Angeles, Chicago, Detroit, Houston, Dallas, Atlanta, Cleveland, Vancouver, Hong Kong, Shanghai, Beijing, Tel Aviv and Helsinki.

“It is exciting for Four Seasons to return to New Bern to present this diverse program,” said Ara Gregorian, festival founder and artistic director. “It’s our pleasure to be a part of New Bern’s cultural community and to return to beautiful Cullman Performance Hall.”

The Four Seasons Chamber Music Festival is in residence at East Carolina University.

Ticket prices are $30 for the public, $25 for Tryon Palace Foundation Members and $10 for students. Tickets can be purchased at www.ecuarts.com, by calling 800-ECU-ARTS, or by visiting the Bank of the Arts in New Bern. For information on how to support Four Seasons Chamber Music Festival programs and outreach, call 252-328-1268.

For more information about the festival, repertoire, guest artists, or outreach visit www.ecu.edu/fourseasons, like Four Seasons Chamber Music Festival on Facebook, or call 252-328-6019.