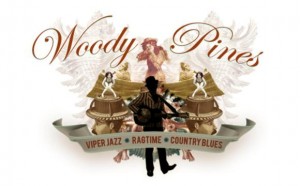 Listen to featured performers at www.reverbnation.com/venue/broadstsocialclub.

Unknown Tongues has been rocking NC and beyond with Cajun and Zydeco music since 1990. They host the annual Gloucester Mardi Gras.
Doors open at 8pm. Cost $8 at door.

“Certain talented musicians have the ability to transport the listener to a different time by just hitting some strings or directing the air that fills their lungs. For Woody Pines, you find yourself in the Mississippi Delta when AM radio is king, sippin’ whiskey if you’re fortunate and moonshine if you’re desperate. The band; comprised of Woody on guitar, banjo, harmonica and lead vocals, Zack Pozebanchuk on upright bass, Nathan Taylor on drums, and Darin Gentry on fiddle; epitomizes the Dixieland sound and embraces a simpler time. “New Orleans has music seeping out of the bricks in the old French quarter,” said Woody Pines, who moved to New Orleans to study the city’s famous music scene, but now resides in Asheville, North Carolina. “We went down there to learn [the music] not just note for note, but also through the food and lifestyle that make New Orleans so special.” Although the group has been playing together for two and half years, Pines is the driving force both creatively and on stage, which has lead to some very tall comparisons. “I’m not really sure where the Bob Dylan associations come from,” said Pines. “But I love Dylan and I’m honored to be alive when he is, so I take it as a compliment.” Pines, who comes from a musical family and has been playing music since he can remember, describes the band’s sound as “one that has been created through time,” and its songs reflect that belief. “Reefer Man” immediately brings to mind a haunting, Halloween hootenanny that could have come straight out of vaudeville. “Pretty Blue Eyes” puts listeners straight into the backseat of a convertible, whipping around the back roads of the Delta on a crisp, autumn night. Several other songs by the band, such as “Nashville” and “Delta Bound,” evoke thoughts of a Southern gossip or a post-Civil War America where the blues weren’t just a style of music, but a way of life. “I pick and choose the best sounding stuff,” said Pines. “Everything from swing band to old country blues goes into our music, along with life’s influences.” By Max Bonem Athens, Ohio. Listen Counting Alligators and go see this band! Watch Woody Pines Band in action: http://youtu.be/GCCjx3GrNMs.