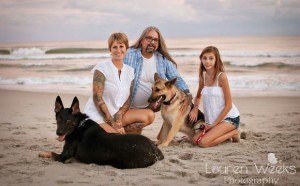 Photo by: Lauren Weeks of Beth, Marc, and Leigh Fairchild with their family pets

I am a mother, a wife, a daughter and a granddaughter. At 29, I’m a successful business owner, a member of the PTA, I carpool … and I have tattoos. As a young girl, I always knew I wanted to be tattooed, and at 21, I began my elaborate collection. I never thought then about how my decision to decorate my body would be perceived in the public eye and just how many people would judge me based, not on my own morals, values or work ethic, but solely on my outward appearance.

I’ve heard it said many times that the biggest difference between people who have tattoos and the people who don’t is that those with tattoos don’t care whether you’re tattooed or not. For me, this adage could not be more true, however, for the mainstream reader, their impression, most likely, is that tattoos are taboo, dangerous in some way, or simply a regrettable mistake. 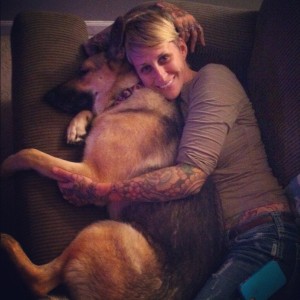 I believe communication, expression and self-improvement are core to being not only functional, but intelligent and successful members of society, and it is unfortunate that because tattooing is our way of portraying this belief we must endure the prejudices and stereotypes of others. Don Burleson, who owns a corporate consulting and training firm, said in a recent article relating to tattoos in the professional workplace: “It’s no surprise that tattoos are more popular among the poor and undereducated.”

The fact is, more than 24 percent of the American population is tattooed. That is roughly 40 million people, and this is still a tiny majority when considering those of us who are heavily tattooed. Our body art is an expression of self. Tattoos say, “This is me. I am what I am,” not “Hey, look at me, I’m a loser!” I assure you, I am not poor, I am not undereducated. I’m just a regular woman who does regular things just like everyone else. I’m no different, other than that I chose to express myself with art that I wear on my body.

Although it’s hard to imagine such narrow-mindedness still exists, I have found that for most people, tattoos still carry a negative image, and the majority of the negative opinions towards personal variance seems to be more of a generational conflict or elitism. These gaps are closing.

“I get a very positive response from my students,” said Heather Pieros, 36, a middle school librarian who rides a motorcycle to work, has two-tone hair and several tattoos. Her tattoos are symbolic of her Irish heritage and a reminder of her “tough grandmother” who inspired her to remain strong through her own personal challenges. They are outward expressions of her lightheartedness and nurturing nature, and while she may not be a “typical” school librarian, she manages to keep the children’s attention and to “keep reading cool and fun.”

There is a younger, more forward-thinking generation of students and professionals who are our upcoming managers, executives, vice presidents, doctors and attorneys who are more likely to view tattoos and piercings as just another fashion accessory. Admittedly, there are times discretion might be needed in terms of what is appropriate in some fields of work, however the decision whether or not to bare your tattoos should not be based on how your body art may or may not limit your professional advancement. We should be judged on qualifications and skill. It should be about who we are, not how we look.

“[Getting a tattoo] is something I always wanted to do,” said Lance Fanucci, a 38-year-old criminal defense attorney and skydiving instructor. Fanucci has three tattoos, all of which are symbols of “being free and being aware of the world around you.” Although Fanucci admits to getting “looks” for baring his tattoos and piercings in front of his colleagues, he gets more of a “surprise” reaction when he reveals to his skydiving students that his fulltime career is the practice of law. 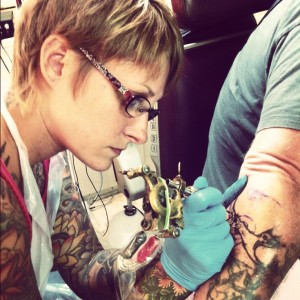 As tattooing and piercing becomes more and more mainstream, I’m hoping to see that our culture will soon embrace this art as individuality, expression of self, a carnal message, not as a sign of immaturity, ignorance or bad taste. Fanucci told me that while body art may not be “normal” among other attorneys, his personal experience highlights a fluid tolerance for his tattoos.

My generation is the future. We have already reached positions of power and prestige, and we’ve had to work harder at it because of our outward appearances. As we continue to climb the social, corporate, judicial and legal ladders, we will not form an opinion of others based on their choice of self expression and we will have less discriminatory policies.

Side note: I’ve personally visited Beth at their Lucky Street Tattoo Shop and have to say this is the cleanest and most respectable tattoo place I’ve ever been to. Although I only have one tattoo as it was a rite of passage while I was in the Navy. I’ve visited many tattoo parlors with shipmates during my travels around the World. Marc, Beth, and Doug will not allow “drunken or drugged patrons” to get a tattoo. They believe this should be a well thought out process and would rather turn away customers than give someone a tattoo they may regret if they’re under the influence.