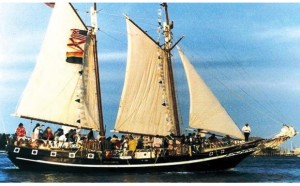 Take a step back in time aboard the Conch Republic’s 74′ traditionally rigged topsail schooner WOLF! 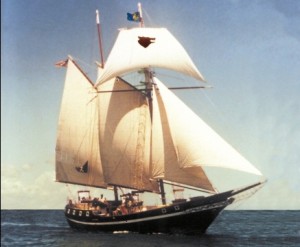 The WOLF is a classic 74’ gaff rigged topsail schooner built in 1982-1983 in Panama City, Florida by Master builder Willis Ray and Finbar Gittelman, Admiral First Sea Lord of the Conch Republic, who also serves as the ship’s master. Designed by Merit Walter, the WOLF is a Norfolk Rover class steel hull schooner.

WOLF is home ported at Safe Harbour Marina in Stock Island Key West and is owned and operated by Key West Packet Lines, Inc. Designated the Flagship of the Conch Republic and the City of Key West, WOLF is patterned after the blockade runners that plied the waters of the Florida Straits, Caribbean Sea and Atlantic Ocean in the 19th century. A Key West icon, the WOLF has been featured in numerous publications, films and documentaries.

WOLF is known for her humanitarian Mission of Mercy Sails and has taken donated relief supplies to Port Antonio, Jamaica after Hurricane Gilbert (1987), Guanaja, Honduras after Hurricane Mitch (1998), Hope Town, Abaco Bahamas after Hurricane Floyd (2004) and to West End, Grand Bahama after Hurricane Ivan (2005.) In 1998, WOLF transported members of the Interfaith Pilgrimage of the Middle Passage to Cuba on their journey of retracing that ancient route of slavery.

Bookings and information: 305-296-9694 or SailAway@SchoonerWOLF.com