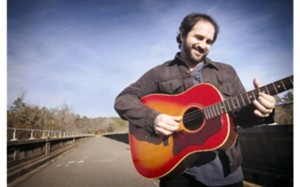 Durham, NC, based songwriter and guitarist Jon Shain performs at Broad Street Social Club on the evening of Sat. Aug. 25 for an intimate folk-blues concert. The award-winning songwriter and acoustic picker will play a mixture of his own latest cuts as well as some classic Delta and Piedmont style blues and American folk classics. Expect to hear some serious finger style guitar-picking and spontaneous riffing.

Jon Shain has been featured many times on Public Radio East, and last played in the area at a sold-out show this spring at Tryon Palace along with Lightnin’ Wells.

Shain was a finalist in the 2009 International Blues Challenge in Memphis and is the 2008 winner of the Triangle Blues Society’s Blues Challenge and 2006 winner of NC’s Indy award for Best Folk Act. He has shared stages with the likes of Keb’ Mo’, John Hiatt, and Jackson Browne.