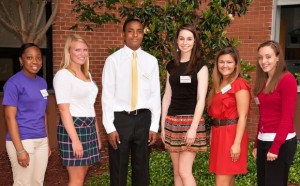 Eight graduating high school seniors in Craven, Jones and Pamlico County have been selected to receive merit-based scholarships and grants given annually by the CarolinaEast Health System (CHS) Auxiliary.  The Scholarship Program began in 1984 with a $4,000 sponsorship for one student. Over the years the program has grown to include multiple gifts, ranging from $1,000 – $10,000, given to deserving local students interested in pursuing careers in health care.

“These scholarships are funded by proceeds from various projects which take place year round,“ explained Tim Dakin, Auxiliary President. “While the Auxiliary lends financial support to many programs related directly to patient care at CarolinaEast, the opportunity to provide these scholarships is one of our most rewarding endeavors and is very special to our membership and to the recipients.”

This year’s $10,000 scholarship winners are Kelsey Brown of Havelock High School and Emily Knortz of New Bern High School. The scholarships will be paid out over the course of their four-year undergraduate programs.

Kelsey, daughter of Michael and Melinda Brown, is involved in numerous clubs and sports and was recently awarded the President’s Volunteer Service Award and the Wendy’s Heisman Award, all while holding the highest academic ranking in her graduating class. She will be attending N.C State University in the fall, majoring in pre-professional biology. Her goal is to attend medical school.

Emily is a member of the Interact Club, National Honor Society, and Junior Civitan Club. She also plays soccer at NBHS and in a prestigious soccer club in eastern N.C. and will continue playing at the college level at Campbell University where she plans to major in pre-pharmacy. She is the daughter of Matthew and Barbara Knortz of New Bern.

A second group of students have each been awarded $2,000 grants payable over two semesters.

Xavier Collins is the son of Andrew and Carrie Collins of Vanceboro. He will be a June graduate of West Craven High School. He is active in the National Honor Society, Link Crew, and Science Olympian and the WCHS band. Xavier will be attending the University of North Carolina at Chapel Hill in the fall. Ultimately, he hopes to attend medical school to become a physician.

Kyandra Smalls is the daughter of Antwan and Kimberly Moore and will graduate from Jones Senior High School next month. During her time at JSHS she has completed nearly two years of college credit through Lenior Community College, is president of the National Honor Society and a leader in the Air Force ROTC program. She credits her interest in health care to her time spent volunteering at Lenoir Memorial Hospital. Kyandra plans to major in Exercise Science at the University of North Carolina Wilmington and then continue her education in physical therapy.

Four additional students will receive $1000 each, payable their first semester of college.

Emma is Student Body President, a triathlon athlete, camp counselor at Camp Sea Gull and Seafarer and a state delegate for the state YMCA Youth and Government program. Emma will be attending the University of North Carolina at Chapel Hill in the fall working toward a degree in Exercise Science. She is the daughter of Scott and Susan Conley of Oriental.

Katie, daughter of John and Lisa Lackman of Arapahoe, has spent many hours volunteering at CarolinaEast Health System, with Relay for Life and tutoring elementary school students. She is also a member of the Beta Club, Student Government Association and ROTC. Katie will attend Campbell University in the fall as a part of the pre-pharmacy program.

Susanna is President of the NBHS Interact Club and will be going to India this summer with the Rotary Club. She has volunteered over 200 hours at CarolinaEast Health System and has already earned her CNA licensure. She will be attending Wingate University this fall in the nursing program. Susanna is the daughter of Don and Susan LaPrairie.

NyQuisha is the daughter of Dennis Best and Lora Staten of Dover.  She recognized her passion for health care in the clinical portion of the Allied Health Curriculum. She is a member of the National Honor Society and will attend the University of North Carolina Greensboro in the fall to pursue a degree in nursing.

CarolinaEast Health System Auxiliary members and the entire CarolinaEast team would like to extend their heartfelt congratulations and best wishes to each of these students as they begin to build their careers in health care.  We look forward to seeing the positive impact they will have on their future patients and their communities.