Every day when we pick up the paper or watch the news, there is another tragedy. Tornadoes in the Midwest, young soldiers killed in faraway places, car wrecks or people unemployed and fighting for survival.  Do you ever think about the story behind the story. In each of these situations, there is a mother, wife/husband, friend involved or sometimes it is the pet left behind. The implications are far reaching. 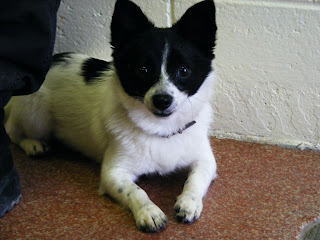 Easter weekend a house burned down in Fairfield Harbour. A wonderful couple, friend and neighbor lost everything including their two pets. It was reported in the newspaper and many times the video was shown on television – and each time, it was mentioned that they lost their pets. The story behind the story is how much these pets were loved and what a tragedy it was to their owners. When I talked to Sharon Henke, she said that the hardest part was their loss. She could deal with losing her furniture and possessions, but losing her beloved cat and dog was unbearable. Cotter, her cat, thought he was a dog and his best friend was the dog next door. They decided to adopt a dog as a companion for him.   They had adopted Liberty, an 8 lb Pomeranian mix from the New Leash on Life program at the Craven Correctional Institution. She fit right in and she and Cotter, the cat, became friends and happily ran through the house together. The only problem was that this cute little dog would not respond when called. She was definitely smart but for some reason did not know her name. They decided to give her a new name that was similar and had a similar cadence.  They chose LadyBird and it was a winner. She came running. When I told the people at the prison, they laughed and said that her trainer was Hispanic and he pronounced her name differently than we would – thus, she did not recognize the English version. They only had her ten days before the tragedy struck.
This tragedy has certainly been far reaching. Friends have rallied around cocooning the Henkes in a circle of love. The story behind the story – although so sad it is heart wrenching, has brought a community together. From what I understand, they have received so many cards, gifts of clothing, basic essentials – and socks that they could open up a store. People they know and people they have never met have contributed to their cause in  love. Through it all, they have not lost site of the precious pets that were lost to smoke inhalation. They have asked that anyone feeling so inclined make a contribution to Pals for Pals and the New Leash on Life program. Through Cotter’s and LadyBird’s loss many other animals can be helped. The New Leash on Life lost three dogs in the last month. Cute little Liberty/LadyBird, Orville who was adopted by a former Fairfield Harbour family with seven children and Denton who was adopted by the Marine that fostered him. Many stories behind the story. Denton’s owner still has a hard time talking about him and how much he misses him. The little boy that saw his beloved Orville get killed is still traumatized. So many stories behind the story.
We are fortunate enough to be the adoption coordinator for the New Leash on Life program and are able to share in so many happy wonderful stories behind the story when our shelter dogs, trained by a prison inmate, find wonderful forever homes. Most of the time, I like to write about these happy stories but, today, I feel moved to linger on the unhappy story of our recent losses. I am comforted to know that our NLOL dogs, too soon gone, enjoyed the best time of their lives with their adopted families.
Submitted by: Bonnie Compton, President, Pals for Paws, P.O. Box 14740, New Bern, NC 28561