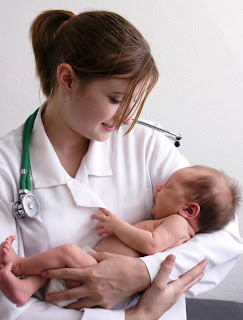 A button has been installed in the Labor & Delivery unit that allows families to cue a recording of an instrumental version of Brahms’ Lullaby to play over the public announcement system. The tune is heard throughout the Medical Center and has been popular with patients, staff and visitors alike.

Commonly called the “Cradle Song,” the lullaby’s melody is one of the most recognizable in the world. The piece was originally written by Johannes Brahms in 1868. Various lyrics in many languages have been added over the decades.

The project took shape because of a desire to highlight the miracles that happen every day at CarolinaEast Medical Center.

“It’s a really special thing because it offers a cheerful reminder to everyone of the reasons why they entered the health care industry in the first place. It is not just about being there when people are ill or injured, but to care for and celebrate with them at happy moments as well,” says Kelsey Atkins, public relations specialist for CarolinaEast Health System.

The first parents who shared their news through song were welcoming twins to their family. The lullaby played through twice – once to honor each child.

For more information, call the CarolinaEast Public Relations department at 252-633-8154.