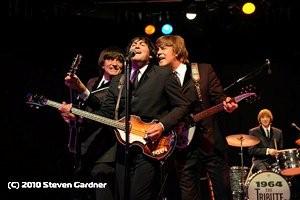 The New Bern Civitan Club was overwhelmed with requests after last years’ August 13, 2011 Beatle Tribute concert to bring “1964 The Tribute” back to New Bern. The New Bern Civitan Club is proud to respond to these requests and announces that 1964 The Tribute, “The Greatest Beatle Tribute Band On Earth “…. according to Rolling Stone Magazine…. is returning to New Bern on June 30, 2012 at the Grover C Fields Performing Art Center with another thrilling concert.  Over the last 11 years running, 1964 performed to capacity crowds at Carnegie Hall (2,800) and Red Rock Amphitheater (10,000) and last year’s New Bern show sold out early and left over 100 without tickets.  You, your friends,  and neighbors won’t want to miss this opportunity to see their return performance.  VIP and Preferred seating are now on sale and going quickly. ACT now to reserve an available seat of your choice in the first 10 rows by calling 252-636-0845.

General admission tickets are $37 (open seating) and are on sale at the New Bern Riverfront Convention Center, Fuller’s Music Store in New Bern and Guitars Etc in Havelock and starting early June at Harris Teeter in the New Bern and Morehead City locations.  For your convenience, you may also purchase General Admission tickets via mail order by calling 252-636-0845.
General Admission Group seating for groups of 10 or more is also available prior to June 2 by calling 252-636-0845.
Want to visit 1964? Check out their web site at www.1964site.com.