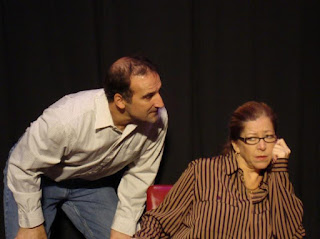 Ratio Theatre will present “Talk About The Passion” by award winning playwright British Playwright Graham Farrow. This is the Eastern NC premier of this globally produced play. 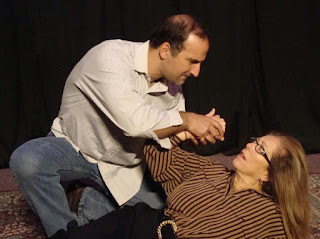 Graham Farrow weaves a dark tale of a lonely man and a vanished child, where guilt and innocence become an indistinguishable grey area in this disturbing and tense psychological thriller.

When his son’s killer releases his memoirs to great acclaim, a grief stricken father sets out to avenge the death of his son. The father visits the publisher of the memoirs and what follows is a psycho-thriller of the highest magnitude.

Talk About the Passion visits the emotional gamut of loss, grief, guilt, shame, depression, anger and the intense passion that results when such feelings reach the breaking point. The two characters come to vivid life as we witness one hour of extremely intense drama.

Be prepared to be on the edge of your seat as two expert actors: Joey Infinito and Andrea Owens, under the direction of Ratio co-founder, Alan Berger, take you on a wild ride of high emotions.

This play was written as a commentary on pre-existing laws in the UK that permitted convicts to profit from their crimes. Similar holes existed in US laws as well.

Farrow, not only an award-winning playwright but also a screenwriter, novelist, and journalist, published his first novel, Speak No Evil , which received a Commonwealth Writers’ Prize nomination in 1989. He has received numerous awards and commendations for his short stories. His plays include Hair of the Dog (1990), Down Amongst the Dead Men (1993), The Boys are Back in Town (1994), Lake of Fire (2005), Pure Morning (2009), and Stay With Me Till Dawn (2010). His two most produced plays are Rattlesnakes, which is in development as a motion picture with Piper Films of London and Talk About the Passion. Talk About the Passion contains adult material and is not suitable for children.