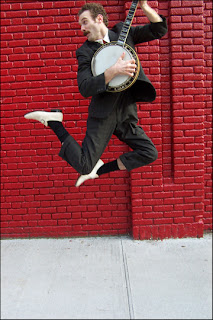 CURTIS ELLER is New York City’s angriest yodelling banjo player. He sings about pigeon racing, performing elephants and Jesus, all of which he has seen with his own eyes. He started his show-business career at the age of seven as a juggler and acrobat in the Hiller Olde Tyme Circus in Detroit, but has since turned to the banjo because that’s where the money is. His biggest musical influences are Buster Keaton, Elvis Presley and Abraham Lincoln.

Mr. Eller has appeared at funerals, horse races, burlesque revues and punk rock dumps. Haunted by the ghosts of silent film and wearing a dead man’s clothes, Mr. Eller staggers his way into the hearts of audiences from London and Amsterdam to Los Angeles and Montreal. In 2011 Curtis Eller played extensively on both sides of the Atlantic ocean. Along the way, he shared the stage with strippers, contortionists, glass eaters and folksingers. Playing more waltzes than any other band I know of, but nobody ever seems to feel like dancing.

Mr Eller’s tune “Alaska” was voted “2003’s most Popular” on NPR’s All Songs Considered. The music has the unmistakable sound of a pistol being fired in an abandoned salt mine: lonesome and violent.

For a retrospective of Curtis Eller’s career visit: www.curtiseller.com.