The above video was produced by: Beth Grooms, Volunteer for the Mid Atlantic Great Dane Rescue League.

Updated Jan 4, 2012: Terrific news: Shellie has hit the website with her adoption profile. She already has an approved adopter and their dogs will be meeting her soon. Paddy’s skin is doing much better. She is set to be spayed next week and should be on the website asap. Submitted by: Debbie Ham, Foster/Volunteer Team Leader, Mid-Atlantic Great Dane Rescue League

If it wasn’t for passerby, Shellie Padric, the two Great Danes probably wouldn’t have survived much longer in the Croatan National Forest. The dogs were found on Catfish Lake Road at the border of Jones and Craven Counties.

Craven County’s Animal Control Supervisor, Trinity Smith, believes the animals were dropped in the location and hadn’t been in the elements very long. There emaciated state shows they were confined, as both had bed sores on their hips.

Officer Smith said she’s never seen a dog in that condition that was still walking. She was referring to Shellie, who weighed 44 pounds when they were rescued last Wednesday, November 15th. Shellie gained 11 pounds during the past six days at Craven Animal Hospital as they’ve been treating her for malnourishment and a type of mange. She’s also received transfusions. Her sister, Paddy, is in better health, but still has a long road to recovery.

Shellie and Paddy were named after their rescuer and have been adopted by the Mid Atlantic Great Dane Rescue League.

Someone has seen these poor, abused animals before. If you know who the owners are, please call Trinity Smith at the Craven Pamlico Animal Services Center, 1639 Old Airport Rd., New Bern, NC, 252-637-4606.

With love and treatment, they are looking better each day! 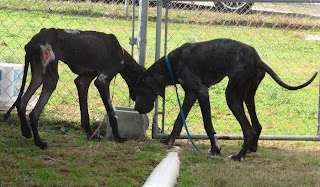 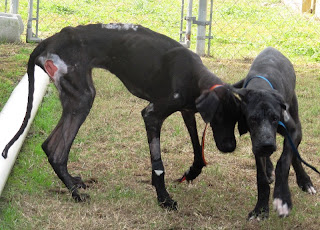 Please feel free to comment below or send me an email.