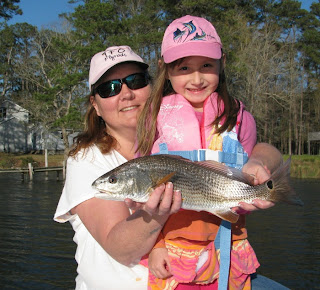 The Neuse and Trent Rivers and the many creeks off the Neuse hold an amazing number of game fish, all eager to eat after a long winter.

Striped Bass or “rockfish” are New Bern’s premier April game fish. These estuary stripers are not ocean giants but are healthy two to eight pound average with a few larger specimens being landed. April is spawning time for these fish and they will be moving up the Neuse towards Goldsboro to continue the line. With this in mind, anticipate stripers moving or “staging to move up and down river this month. 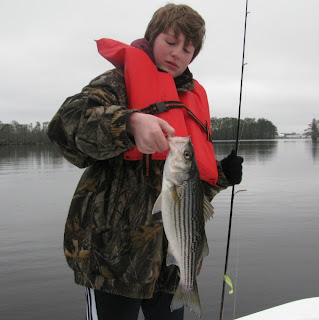 The bridges and river channel ledges are places stripers will hold and anglers should concentrate their efforts. Sub-surface lures such as soft plastic bodies with lead jig heads, bucktails and diving lures are excellent choices for probing the waters for that day’s feeding areas. Once found, stick in that area or work similar areas to catch more fish.

In addition to stripers, these up river areas will hold a large variety of fresh water fish. Largemouth bass and catfish are favorites but pan-fish such as crappie, bluegill and white and yellow perch are plentiful, large and great eating. Small jigs, spinning and live bait such as minnows and crickets are all good choices for panfishing. 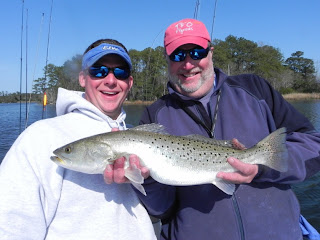 For those who enjoy a touch of salt, spotted sea trout, puppy drum, (redfish) and flounder are plentiful in the creeks and river shores below New Bern. Again soft plastic and scented soft plastic bodies and lead head catch plenty of fish by themselves or attached to a popping cork. Suspending lures like the Mirr-O-Lure MR 17 are also a favorite of local anglers. Live and cut baits will also work on floats or on the bottom.

Fly fisherman should also do very well on all the above mentioned species. Just match the rod and line; sometimes sinking or sink tip lines, to get the right size fly to the fish.

April is a good month for the young folks as well. Fish will be schooled and often very close to the dock, ideal for kids to catch the fishing fever!

Don’t be surprised if you catch fresh and saltwater fish in the same areas on the same baits and lures. Bluefish, for example can show up in numbers in April.

For more details and trip info be sure to stop by one of our great tackle shops or call an area guide. There is plenty of great fishing is some of America’s prettiest waters.