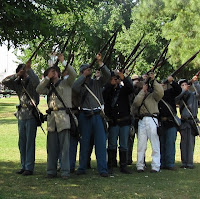 New Bern, NC – Experience the outbreak of the Civil War through the eyes of the New Bern residents who lived it. Throughout the weekend, tours of the historic Dixon and Stanly houses will focus on New Bern during the time of the war’s outbreak to the Battle of New Bern and its subsequent occupation. In addition, Tryon Palace will be offering several theatrical and musical programs that bring to life the reality of the Civil War through many different perspectives.

Several performances feature Sparky and Rhonda Rucker, who perform in the U.S. and overseas, singing songs and telling stories from the American folk tradition. Sparky Rucker has been performing over forty years and is internationally recognized as a leading folklorist, musician, historian, storyteller, and author. Rhonda Rucker is an accomplished harmonica, piano, banjo, and bones player, and also adds vocal harmonies to their songs. Sparky and Rhonda have performed at the Kennedy Center in Washington D.C. and the Smithsonian Folklife Festival, as well as NPR’s On Point, Prairie Home Companion, Mountain Stage, and Morning Edition. The Ruckers have also been featured tellers at the International Storytelling Center and Festival.

Explore our calendar at www.tryonpalace.org for detailed information on individual events, or call Katie Loveless at 252-639-3580.

Join us for a look at Civil War history through song and narrative. In this costumed program, Sparky and Rhonda Rucker highlight the causes and events leading up to the war and its impact on the country. The stories, some sad and some humorous, reflect personal insights from the historical figures who participated in the war. The program presents perspectives of both the North and South, including that of African American soldiers that took part in the conflict.

This program takes you on a musical journey that spans over three centuries of African American history, including slavery, the Underground Railroad, the Civil War, westward migration, birth of blues music, and the civil rights movement. Interspersed with stories, Sparky and Rhonda Rucker share a rich variety of American musical forms, from slave spirituals to chain gang songs. Hear the history of our country through the voices of the people who lived it

In 1861, secessionist fever swept across the South. Visit the Academy Green and learn how the outbreak of the war may have affected the men and women of eastern North Carolina. Activities will include interactive musket drilling, historic craft activities for all ages, and sewing and musket firing demonstrations. Musket firings will take place at 11am, 1pm, and 3pm on Saturday and on Sunday at 2pm and 4pm.

In the event of heavy rain, musket firings will be cancelled and all other activities will be moved to the North Carolina History Center.

Learn about New Bern during the Civil War with family craft activities and a special interactive gallery cart that explores the bigger picture of the war and its affects on the people who lived through it.

This special historical program gives a unique perspective into the songs and stories of slavery, abolition, and the Underground Railroad. Sparky and Rhonda Rucker bring personalities such as Frederick Douglass, William Lloyd Garrison, and Harriet Tubman to life through music and stories. Discover the symbolism, messages of freedom, and practical purpose of many traditional American slave songs.