New Bern’s 300th Anniversary Committee along with the City of New Bern officials and many local media/non-profits were instrumental in the kick-off celebration to welcome our New Year – 2011!
For the crowd who gathered at Union Point Park, you will be in a photograph that will go down in New Bern’s history! It will be archived in New Bern’s “300th Anniversary Time Capsule” scheduled to be opened on September 16, 2060.

Just think, your children, grandchildren, and great-grandchildren will reflect on New Bern’s 300th Anniversary!
2060…Hmm…I seriously doubt I’ll be around for New Bern’s 350th Anniversary Celebration, but you never know, especially with advances in medical technology!
Today’s special commemoration acknowledged today’s youth who wrote special essays that will be included in the Time Capsule. Imagine that one of these youngsters may be New Bern’s Mayor 20 years from now. Who knows what’s in store for our great City! 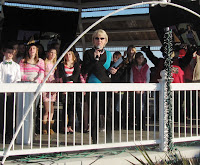 A special highlight of today’s New Year’s Eve Kick-off was the presentation by Linda Staunch of a mini “Bear Town Bear” to Nelson McDaniel, the Chairman of New Bern’s 300th Anniversary Celebration!

I wish eveyone near and far has a prosperous New Year in 2011!
Wendy Card