Last night’s BBQ in Blue Jeans Benefit for the Fireman’s Museum was a fun-filled evening with great food, drink, and entertainment! 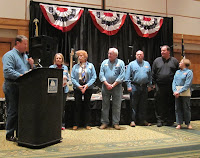 Wayne Goodwin, NC’s Fire Marshall and Insurance Inspector, announced the presentation of the Order of the Long Leaf Pine Award to Tommy Moore, owner of Moore’s BBQ. It was obvious that Tommy had no idea he was the recipient. I was surprised because I heard about this special secretive event two weeks ago, but nobody let the cat out of the bag! This award is the highest honor from the Governor of North Carolina bestowed on a citizen. With over 35 years of providing community services in time, goods, and assistance to New Bern, I believe he deserves this honor!

If you don’t know Tommy Moore, he is a very humble man. He thanked his wife and team for supporting him and said, “It’s hard to accept the recognition for doing something that you love and I can’t think of any greater people to serve than the people of this great city of New Bern, NC”. Tommy’s list of accomplishment continues to grow, he received the Guinness World Record last year and received a Ripley’s Believe It or Not Certificate last week.

Alderman Bengel announced the Fireman’s Museum’s current project is the “major construction of the old Fire Station and moving the current Fireman’s Museum into a new Fireman’s Museum”. “You can purchase a brick to honor a loved one or family member for $100 per/brick” and $250 for papers.