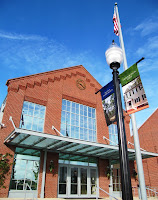 New Bern History Day December 11th at the North Carolina History Center at Tryon Palace is a free all-day program presented in conjunction with the 300th Anniversary of the City of New Bern. New Bern History Day features the New Bern Tricentennial Symposium, 10:00 a.m. – 3:30 p.m., presented by the Swiss American Historical Society, in the History Center’s Cullman Performance Hall. And, in the Museum Store from 11:00 a.m. until 3:00 p.m., Craven County historian and author Edward Ellis will be signing copies of his book, New Bern History 101.

At 10:00 a.m., Swiss American Historical Society (SAHS) past President Heinz Bachmann opens the New Bern Tricentennial Symposium with a welcome address about the SAHS and introducing the Symposium’s featured speaker Leo Schelbert, Professor Emeritus of History at the University of Illinois at Chicago. From 10:45 p.m. until noon, Professor Schelbert will present his lecture, Sketch of Five Worlds Enmeshed in the Emergence of New Bern 1709-1720. Professor Schelbert, a Swiss citizen from Steinen, in the Canton Schwyz, received his Ph.D. in American History from Columbia University in 1966. From 1963 to 1969 he taught at Rutgers University, followed by two years of research in Switzerland. >From 1971 to 1999, he taught at the University of Illinois at Chicago, where he is now professor emeritus and continues working with Ph.D. students. He has authored or edited nine books and has published more than fifty scholarly articles.

Appearing in the new Museum Store from 11:00 a.m. until 3:00 p.m., well-known Craven County historian and author Edward Ellis will sign his popular book on the history of New Bern, titled New Bern History 101. Edward Barnes Ellis, Jr. has worked as a journalist, a lobbyist and a laborer. Mr. Ellis is the descendant of a family that recorded the first land deed in North Carolina. Among his ancestors are settlers at Jamestown and veterans of the American Revolution and the War Between the States. He served in the North Carolina General Assembly as a legislative representative and has had wide-ranging experience in the newspaper business as a reporter, photographer, columnist, editor and publisher.

The New Bern Tricentennial Symposium gets underway again at 2:00 p.m. when Betty Thomas Wood, local columnist, historical expert and President of the de Graffenried Association, presents her lecture on The Legacy of Christoph de Graffenried.

Following Ms. Wood’s presentation, attendees are welcome to visit the free BernNewBern Exhibit in the North Carolina History Center’s Duffy Exhibition Gallery. This international exhibit, which first opened in Bern, Switzerland, celebrates the relationship of New Bern to its Swiss mother city and pays tribute to its history from its earliest beginnings through today. Also on view will be the painting North Carolina Symphony 300th Tribute Concert at Tryon Palace by Dan Nelson. Painted on the occasion of the 300th anniversary of the founding of New Bern in September 2010, this painting is a personal gift from Aloys and Christine de Graffenried, of Bern Switzerland, to the City of New Bern, in memory of their parents Blanche and Helmuth de Graffenried, who were very instrumental in fostering and developing the friendship between the two Berns.

Founded in Chicago in 1927, the Swiss American Historical Society unites people interested in all aspects of Swiss immigration to America, Swiss-American relations and Swiss history in general. With a membership that spreads across forty-one U.S. states and twelve Swiss cantons, SAHS sponsors scholarly presentations and promotes the publishing of books, fostering cultural awareness and mutual understanding between the two countries.