I’ve shopped in Carolina Creations on a number of occasions, but yesterday was different. I actually spent time visiting with Janet Francoeur, who owns this beautiful art shop and gallery with her husband Michael.

Originally from Adrian, Michigan, where Janet received her BA in drawing and print-making, they moved to Aspen, Colorado. In the 1980s, they made a life changing decision to embark on a journey to find a fresh start and warmer weather. They boarded their motor home and traveled across the Country in search of a unique place to call home.

They enjoyed the time they spent in Key West, Florida, but eventually moved to New Bern in 1989. Once here, they turned their passion for art into a remarkable career as owners of Carolina Creations. This year marks their 20th Anniversary in business! 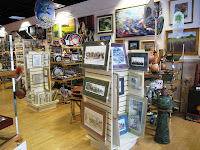 Their first business concept was to purchase arts and crafts from North Carolina artists. Then they broadened their merchandise scope to feature North American artwork. Janet is proud of the fact that they help support the families of 300 artists, especially during these difficult economic times. Janet and Michael personally know 98% of the artists and are proud to display their work.

Browsing the aisles you’ll see “hand blown, hand thrown, hand painted, hand built, hand drawn, hand sewn, and hand sculptured” crafts. Local Painter, Brenda Behr’s, art is on display through December. If you’re looking for a souvenir from New Bern’s 300th Year Anniversary, you’ll find that too! I couldn’t resist the urge to purchase the nifty Christmas cards with New Bern ornaments enclosed that were created by Janet to send to my family. 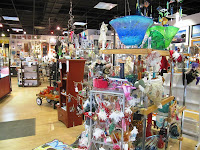 Janet is not only a talented artist, but a smart business woman, philanthropist, and spokeswoman for the Downtown New Bern Community. She joined forces with Carol Tokarski, Executive Director of Craven Arts Council and Gallery as co-founders of the New Bern Artwalk. She’s been instrumental in the creation of “A Dickens of A Christmas” extended holiday event.

She is a professional blogger and website designer who skillfully uses the Internet to reach local residents, visitors, and potential clients. She is the blogger for “A Dickens of A Christmas”; webmaster and blogger for “Carolina Creations”; and she engages residents and visitors on the Downtown New Bern Facebook page: “Downtown New Bern”. She believes it is a necessity for business owners to use the Internet to reach clients as this is the online age.

Janet is a Board Member of Craft Retailers & Artists of Tomorrow (CRAFT) and teaches CRAFT members how utilizing Blogs can enhance their online reputation, build customer loyalty, and ultimately increasing revenue.

Carolina Creations has been nominated for five NICHE – Top Retailer Awards and won in 2006. If you’re not familiar with NICHE Awards they are chosen by artists nominating galleries.

Thanks, Janet, for the fun visit during this busy holiday season! Congratulations to you and Michael on celebrating 20 years in business!