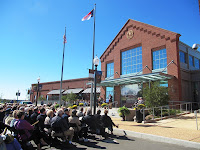 Tryon Palace Commission, Staff Members, and Volunteers did a fantastic job preparing for this morning’s dedication of the North Carolina History Center along with the weekend’s full schedule of events!

A large crowd turned out for this special grand opening! They were entertained by the Tryon Palace Fife and Drum Corps. The New Bern High School NRJOTC presented Colors during The Star Spangled Banner rendition by Pat Rowlett. 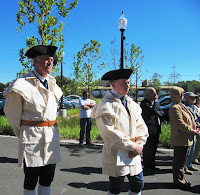 Governor Perdue thanked the Tryon Palace Commission, Staff, and Volunteers, and those from “yesterday to tomorrow” for their participation in creating the NC History Center. She talked about her experience in the History Center’s “Time Machine” and how New Bern led the way since the 18th Century and how the NC History Center will allow New Bern to lead the way into North Carolina’s future. She mentioned the Center has state of the art interactive technology and is a green building. 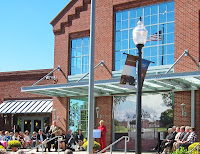 Governor Perdue is optimistic that the History Center will be a major return on investment for New Bern. As of this morning, “New Bern’s unemployment rate has dropped for 7 consecutive months and is now at 9.6, the National average. It was 11.2”.

The dedication concluded with Governor Perdue’s official opening of the NC History Center with a “Ceremonial Key to the Past and the Future”- taken from Tryon Palace’s ceremony program. 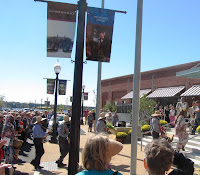 This morning’s opening dedication was only a sample of numerous celebrations throughout the weekend! For a list of events, click here.

Have a great weekend!