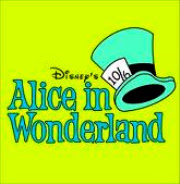 Disney’s Alice in Wonderland, Jr. performances at the Masonic Theatre, 516 Hancock Street on October 15-17, 22-24, 2010. School Performances will be held October 14, 15 and 22, 2010.
Directed by: Terry Daniels and Produced by: Gena Andrews
On a perfect summer day in the park Alice sees a White Rabbit hurrying by. Alice follows him into a dark tunnel. The Doorknob counsels Alice to drink from a bottle then eat a cookie. Alice shrinks which allows her to fit through a keyhole and Alice’s adventures in Wonderland begin. Once There she meets Tweedle Dee and Tweedle Dum, the MadHatter, the Cheshire Cat, the Caterpillar, the Queen of Hearts and many more.
The book is adapted and additional lyrics are by David Simpatico. Music adapted and, arranged with additional music and lyrics by Bryan Louiselle and is based on the 1951 Disney film. Alice in Wonderland features updated dialogue and new arrangements of such classic Disney songs “I’m Late”, “The Un-birthday Song”, and “Zip-A-Dee-Doo-Dah.”
Tickets may be purchased at The Bank of the Arts, 317 Middle St., New Bern, 252-638-2577: $10.00 in advance, $12.00 at the door.
For more information about the production or the RiverTowne Repertory Players, please call them at 252-634-7877 or visit their website: http://www.rivertownerepertoryplayers.net/.