In 2007 Susan Henry was diagnosed with Multiple Myeloma. After an extensive program of chemotherapy and bone marrow transplant from Duke, Susan was given another chance at life. Deliverance by Susan Henry: 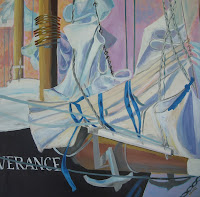 Susan’s renewed focus on fine arts was a major factor in psychologically handling this huge life threatening experience (along with a positive attitude). Presently, by some miracle, Susan has recovered and passionately enjoying the painting process.

Susan has been an avid sailor for many years and painted nautical themes in a representational and graphic style, more as a colorist, creating compositions of “pieces of a scene, as if tearing off a corner of the scene to represent the whole . . .”

Susan has a BA from Gettysburg College in Arts with graduate work in Art Education at Penn State. Susan owned and operated Susan Henry Yacht Graphics in oriental from 1978 until 2007.

Terry Brennan’s current series of mixed media assemblage works titled, Fish Chum Master “Pieces”, come from a strong desire to express his artistic vision through a sculptural medium with impulse as his guide. Using repurposed and upcycled materials ranging from household items and objects from past projects including urethane board he let his creative instinct direct him and the first piece became a fish. Starlette by Terry Brennan:

The process always begins with a single item, whether it be a broken chair, rake or discarded silver bowl it will steer him in the direction for a unique and one of a kind sculpture. Each one is painted to bring them to life either through realistic or quirky colors.

Terry is competing in ArtPrize 2010 in September. ArtPrize (www.artprize.org) is a very different art competition where the goal is for the general public and artists to collide, exchange ideas. Part arts festival, part social experiment — this international contest is decided solely by public vote with a $250, 000 first place prize.