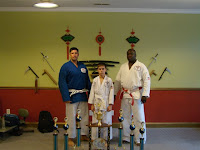 North Carolina Nationals the Bushido School of Martial Arts is under the direction of the Great Master Samuel Pearson.