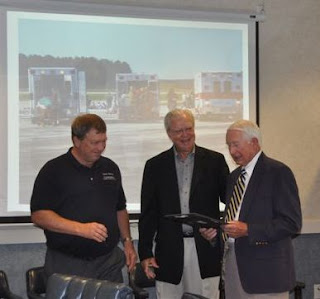 Chairman of the Airport Authority’s Board of Directors, Royce Jordan, welcomed guests to the celebration of James “Jim” Creech’s Retirement from the Coastal Carolina Regional Airport Authority. What a very special occasion!

Royce reflected on numerous changes and accomplishments that Jim Creech was responsible for and/or had taken part of. When Jim began his tenure in July 1985 (25 year ago), New Bern’s Airport was called the Simmons-Nott Airport. Jim was the Chairman of the Board of Directors for 10 years, during which time, remarkable improvements were made to the Airport. The following is a list of accomplishments that Jim played a key role in:

– In 1987, the Old Terminal was enclosed; a baggage claim area was developed; and Avis rental car agency built a rental car and car wash service.
– In 1988, American Eagle came to town.
– The Old Terminal was expanded and the first snack bar was developed in 1989.
– United Airways flights joined the airport in 1990.
– The runway was extended in 1993.
– The historic Crockett-Miller Slave Quarters was moved here in 1994.
– The New Terminal’s ground breaking took place in 1997.
– Midway began flight service in 1999.
– September 11, 2001 shed a new light on airport security, changing the day to day
operations to reflect Federal and State Aviation Regulations.
– The Airport celebrated its 75th Year Anniversary in 2006.
– Delta Airways brought flights to New Bern and Arthur Farm and Alt Properties were
purchased in 2007.
– The New General Aviation Terminal was created in 2008
– The Coastal Carolina Regional Airport sponsored one of the first Aviation Regional
Meetings in the Country and brought the First Art Project to the Airport in 2009.
– Lastly, Bear Town Bear, “Semper Fi”, arrived in 2010.

With Jim’s work ethic and commitment to the people of New Bern along with his drive to continue to improve New Bern’s Regional Airport, it’s obvious that he will surely be missed.

Commissioner Perry Marsh of Craven County Commissioners acknowledged Jim Creech’s accomplishments and thanked him for his dedication for his 25 years of service.

Jim Creech won’t take full credit for the Airport’s remarkable transformation. He stated, “it has been a beautiful relationship between the community and the staff”.

He recognized the fact that it takes a Board of Directors, Airport Directors, and the dedicated staff to make everything happen.

He recognized John Price for his 10 years of service as the previous Director and the current Director, MajGen Tom Bratten, USMC (Ret), and the Airport’s Staff for establishing significant relationships between the Airport and the Community. 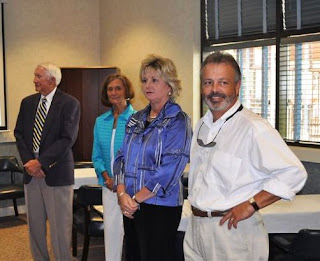 Jim thanked his wife, Mary for her sacrifices and support. His daughter, Myra Hall, was present along with his nephew, Jason Jones who delivered the blessing.

For more information about the Coastal Carolina Regional Airport, please visit their website.