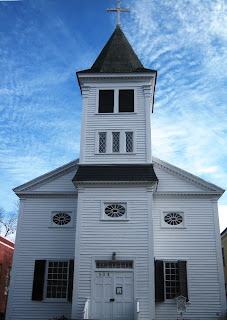 With the Fourth of July Celebrations approaching I thought readers might enjoy some of the documented history from this interesting booklet.

After reading it, I realized the residents of New Bern had the same pride in preserving New Bern’s history as we do today – 81 years later.

The publication highlighted the First Baptist Church, Christ Episcopal Church, St. Paul’s Roman Catholic Church and numerous historic places and landmarks throughout the City of New Bern. Some, I’ve never heard of, but I’m not a historian and some houses may have been turned into office buildings or their names were changed as the many street names were changed.

In 1929, residents opened there homes to an “Old House” Tour. The historic homes were identified with a soldier posted at the door alongside a displayed flag. Old Homes mentioned:

Please feel free to share information about New Bern’s History with our viewers. You can send an email or give us a call.