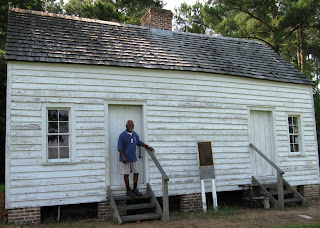 Mr. Ben Watford began the tour at the gravesites of 522 Freedmen and Slaves buried without tombstones or markers. There was one Memorial Monument to encompass all of those interned there.

Ben explained, in their day, slaves were dehumanized and when they died, they weren’t allowed to be respected with a tombstone or grave marker. Their family would place pottery jugs with trinkets in memory of their loved ones. Then, “face jugs” were created to scare away the devil. The scarier the face jugs were, the greater chance the devil would leave their loved one alone and let them move on to Heaven. If you’re interested in seeing or purchasing a face jug that Ben created, please visit Ben’s website or the Bank of the Arts on Middle Street in Downtown New Bern.

We moved on to the Crockett-Miller Slave Quarters, named after the Plantation, which was built in the 1840s. It was originally located on Johnson Street and used as a labor camp. Later, it was relocated to an area near Neuse Boulevard in New Bern.

In 1993, the James City Historical Society relocated the old slave quarters from an area near CarolinaEast Regional Hospital to a secured location on the grounds of the Coastal Carolina Regional Airport off Howell Road.

The owner required specific terms for the move and the Society agreed to the demands of preserving the building with periodic materials (i.e. bricks from the 1800s, wooden pegs used instead of nails, etc.). This small structure (approximately 18 ft x 25 ft) housed 25 – 30 slaves. A fireplace separated the quarters in half. A loft was used as a sleeping area. The bottom sections of the building were used as common areas for cooking, cotton spinning and conversing.

While I sat in this small cabin listening to Ben explain the history of slavery, it was at least 90 degrees outside, sweat from my forehead dripped on the paper that I was taking notes on. Then, I realized my discomfort could not begin to compare to those poor people that worked in extreme conditions and elements of the cotton and tobacco fields. The more Ben told me, the more I wanted to hear about the history.

Presently, one side of the building exhibits tools and equipment used by the slaves and the other side reflects pictures of leaders within the black community in the days of slavery and articles about the history of the slave quarters, the lives of those unfortunate souls, and how General Burnside played a large part in freeing the slaves along with Presbyterian Minister Horace James. 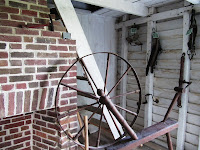 Thank you, Mr. Watford and members of the James City Historical Society, for restoring the slave quarters. Your hard work and relentless efforts reflect the trials and tribulations of slavery and shed light on how fortunate I am to live a free life.

Mr. Watford and members of the Historical Society need assistance with maintaining the grounds, helping to paint the slave quarters, and procuring and installing restrooms to accommodate tour groups. Please contact Mr. Watford at 252-638-8536 if you’re interested in helping with this historical and important project.