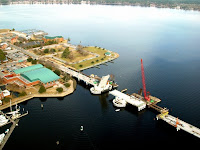 The Alfred Cunningham Bridge was built in the 1950s and closed in May 2007. The new bridge is tentatively scheduled to open on February 26th, 2010.

In 2004, the Board of Alderman along with City and State officials decided to replace the bridge with a new one for $26 million. The price tag has risen to $40 some million; not including maintenance, repair, and operation.

There’s been a lot of negative talk around town about the new drawbridge. Let’s take a look at some of the controversial issues surrounding the bridge opening:

– How will the City of New Bern cover the maintenance, repair and operating costs?
– Should we have a “volunteer operating force” to help defray the costs?
– Are there going to be special “operating” hours to decrease the manpower issue?
– With the 300th Anniversary Celebration, should we have a ribbon cutting ceremony
for the bridge?
– I’m sure I’m missing many other topics, please feel free to submit them by
commenting at the bottom of this article.

What would you do if you were the newly elected Mayor and Board of Alderman?

The first thing I’d say is, “You couldn’t pay me enough money”! Then I would take a step back and try to support our newly elected City of New Bern officials in whatever way I could.

Even if you didn’t vote for them, they were elected by popular vote by the people of New Bern. It’s not as if they were part of the decision making process for the new bridge.

During these difficult economic times, they want what’s best for the City and instead of the constant criticism; maybe we should come together, support them, and Suggest Ideas.

Please tell us how you would remedy these problems.