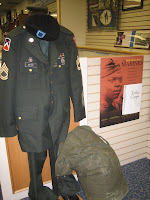 I visited the Carter G. Woodson Historical Foundation Exhibit in the New Bern Mall to learn about New Bern’s Black history and met two wonderful volunteers, Mr. Earl Murphy and Mr. Robert Phillips. They volunteer their time to answer any questions people had about the exhibit. Volunteers are the backbone to our community, no matter what your mission may be.

To give you a little background, Mr. Carter G. Woodson is the “Father of Black History Month”. He was born to former slaves in 1875 and worked his way to Harvard University, which is a tremendous accomplishment now, can you imagine how it was back then? Mr. Woodson was an accomplished author, historian, and journalist, and created Black History Month to spread awareness of the social, political, and educational impacts that African American’s have had on the history of the United States and around the World.

On a local level, New Bern has had many African American Leaders. New Bern’s Uptown Business and Professional Association are working to enhance the lives of those who have come across hard times. They are currently working on opening a computer lab and venue to teach residents basic computer skills and providing workshops for first time business owners. They are in need of computers and volunteers to help with this effort.

An important feature of New Bern’s Black History is the Trail of Flames which took place during New Bern’s Great Fire of 1922 which consumed 40 blocks of African American homes, churches, and businesses. The driving tour has been temporarily suspended due to construction, but you can pick-up a brochure at the New Bern Riverfront Convention Center, Swiss Bear Downtown Development Corporation, New Bern Area Chamber of Commerce, or the Coastal Carolina Regional Airport.

Please contact the Uptown Business and Professional Association if you’re interested in donating computer equipment or volunteering your time to help our community!

Learn more about Black History in America, by visiting the Black History Month Exhibit in the New Bern Mall next to Belk’s Department Store.