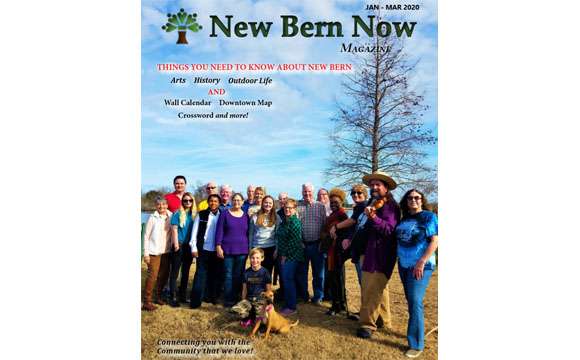 With so much uncertainty during the current pandemic, we are re-evaluating our business model related to the magazine. We are working on a new design and appreciate your patience.

New Bern Now Magazine (formerly known as The Ledger), is a mini version of New Bern Now.com, as our website is our “Home Base” and is updated daily. The magazine was created as a handy reference to inform residents what’s happening in the Greater New Bern area and beyond. It was also created to help visitors learn more about our great town as an area guide to learn about the latest happenings and information!

We are “ordinary” folks who enjoy learning about our community – from River Bend, Fairfield Harbour, Carolina Pines, Trent Woods, Spring Garden, Olde Town, Downtown, Uptown, and everything in between!

We are happy to receive information from readers who want to spread the word about events and interesting happenings. We also enjoy sharing our experiences with you.

We are “local citizens”, making us a “citizen media company”. Our GOAL is to Promote all the great things New Bern and the surrounding towns have to offer! With over 5,000 pages, it’s a “community diary” about New Bern, North Carolina.

Advertisements cover the cost of printing the hardcopies. Special thanks to our advertisers and sponsors!

You can pick up the latest edition at the New Bern’s Airport along with over 100 businesses and nonprofits around town.

We really appreciate everyone’s support in sending us the latest happenings in your community and we look forward to hearing from you!

Current and previous editions are available online, in color, 24/7 by clicking the links below:

Send us your non-profit announcements and updates related to your business via email at email.