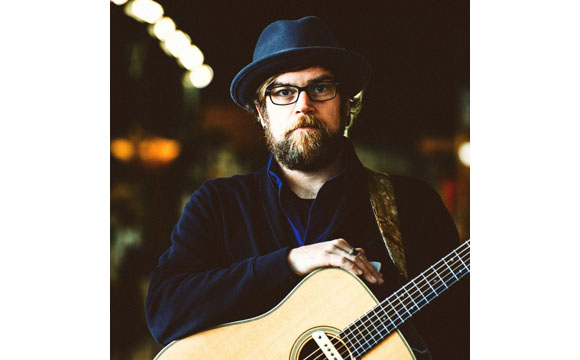 Down East Folk Arts Society is a non-profit, volunteer organization to keep the folk arts alive. As we live out our Mission “to build community through music” while preserving the tradition Folk arts. Concerts are free but, we do “pass the hat” and encourage donations based on our audience’s means. Donations go to our artists.

Aaron Burdett will perform on Wednesday, February 12, 2020 at the Parish House at Christ Church on the Corner of Middle and Pollock Streets in New Bern from 7:30 – 9:00 p.m.

Aaron grew up in Saluda, NC. He attended the renowned Governor’s School of North Carolina for Choral Music. Influenced by the music of Cat Stevens, the Grateful Dead, Doc Watson, Tony Rice, Norman Blake, Led Zeppelin, and David Grier, he performed extensively in Boone, NC. He owned a music store there which sold instruments and offered lessons. His life travels took him across the country where he worked as a hand on various farms and ranches. His music has grown out of those blue-collar working experiences. He has released 7 albums to critical acclaim. WNC Magazine has listed him as one of western NC’s most important musicians alongside such greats as Doc Watson, the Steep Canyon Rangers, and The Avett Brothers. He has won Our State Magazine’s Carolina Songs competition, the Hank Williams Songwriting Contest, and placed in the MerleFest Chris Austin Songwriting Contest, among others.