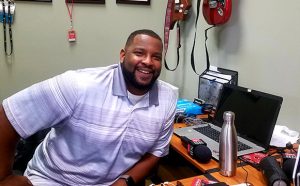 Charles Tendell is an Ethical Hacker. My first question for Charles was, “What is an Ethical Hacker?” He said, “I’ve always explained being an ethical hacker as I can do all of those bad things, but I have chosen and held onto the ideal of what I’m capable of should be used for positive things.”

“I became a hacker to understand the technology. My Dad came home with our first computer and told me not to touch it. Naturally, I was all over that. I discovered a vehicle that allowed me to connect to and consume any type of information that I ever wanted. With that came a level of intimacy and understanding with technology that allows me to see it in a different way than most people.”

“When I first heard the term hacker it was in a movie and it was cool and glamorous. War Games was the movie and I loved it. I saw those people as pioneers. I saw them as the ones who were building and doing different things. But I also came to the realization right around the age of 21 that there were a lot of things that I can do that would benefit me personally. I could take over someone’s website or other things, but I didn’t see any positive benefit beyond me. So, I set out to do things in a way that created services, platforms, or educating other people so they could benefit from the technology they’re using. As an ethical hacker, I spend my days testing technology boundaries, talking to technologies consumers, working with them through their technology and understanding what they’ve got going on and trying to get them to understand that the connectivity between us on the Internet, is a lot more in depth than what they think. A lot of people think that it’s just an appliance. So, I use my powers for good.”

“If you really want to get some insight into my generation of hackers, something that came out during that time frame was the The Hacker Manifesto by The Mentor. It talks about the age we live in. We live in the age of the electron and the switch and the beauty of the baud. We exist in a world beyond sex or color or anything else and it’s all about all of us exploring together and being judged on what we contribute to the community. That really says a lot. That speaks true to every hacker that I know from that generation. Basically, every hacker who I ever met. We see the world as a giant puzzle and we see it in ways that we can unpack, tear apart and look at. Most people walk into a room and they see four walls and whatever else is in there. Instantaneously, I walk in and I see what can be and what else is underlying here. What would this look in that area and it happens just naturally.”

If you really want to get some insight into the way Charles thinks about hackers, read The Hacker Manifesto.

“Every genuine hacker that I’ve known isn’t what you hear about in mainstream media. You always hear about the bad ones (i.e. someone stole this, or they stole my credit card information). The hackers that you don’t hear about are the ones who created the phone that you’re recording on. They created this technology. The Steve Jobs’s, The Bill Gates’s, The Mark Zuckelbergs’s of the world. They created something out of nothing that other people thought was impossible. I can’t tell you how many people in my career that told me something was impossible, that it can’t be done. And I say, watch this, I’m going to try it. That’s the motivation behind every hacker that I’ve ever met. Everybody who genuinely calls themselves a hacker, they’re out for the exploration. They’re out to find the information. They don’t want to hurt anybody, they don’t want to be malicious. It’s really counterproductive to be malicious. I found something, this is unique, it’s different, this is interesting and what else can I do with it! What else can I create with it? And we look up and see, we created Facebook, we created Samsung, we created the iPhone, we created the Internet as you know it today. All of that was done through the spirit of exploration and ultimately put something good into the world.”

In that respect, Charles created New Bern Live and he’s connected people from all walks of life. It’s a terrific opportunity to listen to other people’s perspectives and learn from each other!

If your device is being hacked, Charles can help you! His ideal clients are general consumers wondering if their technology is working, whether they’re being attacked and how best to control it.

Charles has been doing this for 20 years, but in the last eight years he’s figured out that “most consumers are coming from a place of fear, uncertainty and doubt.” He is “the person that answers all the super serious, and sometimes crazy questions that are out there. And I love it! One of my favorite clients of all time came to me and it was a super complex case where one of his friends identity got stolen online and it spiraled into this massive web of crazy, complicated nonsense everywhere and it took me three days of tearing apart every digital fingerprint that I had to figure out exactly what was going on and how we could get the bad guys out of his network and personal life. I felt so alive doing it as I felt like a digital detective and I actually got to catch the bad guy.”

Charles is a down to earth family man who loves what he does. I had to ask him why hackers are portrayed on television and movies as so-called geeks. He had a great answer. “People make a lot of assumptions about hackers, but they also make a lot of assumptions about others in general. A while ago, I posted a photo of my tribe (his family) on Facebook all wearing their hoodies. Assumptions were made of a criminal enterprise.” Charles explained, “Because some people have the idea that if you’re wearing a hoody, you’re a bad person”. The truth is they’re wearing hoodies because they’re comfortable. I wear hoodies and to my knowledge, people haven’t made that assumption about me, but then again I’m a short white female in my 50’s. What kind of bias/stereotype are we dealing with?

Charles also said, “You say hacker, people automatically think that you’re going to steal all my stuff”. No, no, no. I’m the good guy, I’m a good hacker. I spend a lot of my time explaining to people what a hacker does and doesn’t. We’re all a bunch of good people working on technology. We’re obsessed with it and most of us aren’t as geeky as you think we are.”

Another thing you may not know about Charles is he’s a tough guy with a big heart! He’s an Army Veteran. His MOS was a Missile Defense Crew Member.

When I asked Charles what he wants people to know, “I’m open to challenging conversations and different perspectives from anyone. I don’t care where they’re from, what they’re into, what they’re up to. If they’ve got a perspective that I’ve not heard before, and everyone has one, I would really love to hear it. That’s part of the reason why I built this space (The Charles Tendell Studio) and New Bern Live. To create a conduit for people to express themselves and I’m never going to judge people.”

He encourages people to join in the conversation and be part of The Charles Tendell Studio as he says, “It’s okay to be yourself and it’s okay to accept someone else for who they are. It doesn’t take anything from you, just seek to understand them and you’ll see them in a whole different light. They’ll see you in a whole different light. You’ll never start a conversation with an argument. Because of your preconceived notions with one another you might run into an argument. But if you go into it because I really want to understand why you feel that way. It won’t hurt anyone. You’ll learn so much.”

“We’re booting up into the political season. A side effect of this Studio is it’s not 100% all radio, it’s not 100% all podcast, or Internet. It sits on the cusp of all the different technologies and I can see the analytics and trends and I can teach people to how to master the technology to get the message out and reach their target audience. It’s all part of the algorithm.”

We all have a message and New Bern Live is a great way to produce quality content to reach locals!

Join me, New Bern Now, and New Bern Live in getting to know each other as people.

Tune in on Tendell Tuesday for The Charles Tendell Show to find out the latest cyber security threats and much more, as you never know where the conversation will lead!

Thank you, Charles for all that you do to help people find their voice in our community!